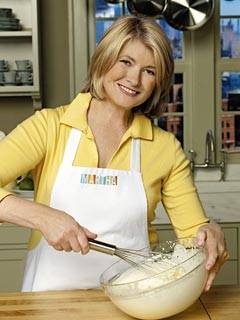 Martha Stewart will be moving to the Hallmark cable network this fall
Martha Stewart is headed to cable network Hallmark this fall where she will control several hours of programming a day: Hallmark will be airing "The Martha Stewart Show" at 10am, 4pm and 5pm in addition to the 90 minute blocks of new originals that will air from 11am to 12:30pm. That amount of creative control sounds interesting but it also seems like a step down. We think of a valuable franchise like "Project Runway" and its move to Lifetime where it still exists but just barely. We think that for Stewart to be successful on Hallmark, she will have to change the demographic of the network and attract the much more diverse audience that watches her on the broadcast network. What's your opinion?
—-
Trapper John has moved on: Pernell Roberts, star of "Trapper John, M.D." passed away on January, 24th from pancreatic cancer. Roberts was a frequent presence on television from 1958 to 1990, most notably in "Bonanza" and "Trapper John, M.D." but made at least one appearance on seemingly every TV show from 1966 to 1979. May he rest in peace.
—-
Starz' "Spartacus: Blood and Sand" premiere last Friday had record viewership on the network but that number of approximately 500,000 viewers is dwarfed by premieres on other networks. Did anybody watch this? We thought it was appallingly bad, a kind of cheesy combined rip-off of 300 and HBO's "Rome". It was entertaining in the "so-bad-it-was-entertaining" genre. We predict that viewership will slump.
—-
Give us your take: On the recent premieres of "Caprica" (Syfy) and "Damages" (FX) in the Comments please!
—-
The TV Junkie Plan: "Attack of the Show", "Better Off Ted", "Dirty Jobs", "White Collar", "Chelsea Lately", Ferguson (Quentin Tarantino)

7:00pm Attack of the Show! G4 - New DVD releases; around the Internet.

8:30pm Better Off Ted ABC - Ted helps his brother get a job selling lab equipment; Veronica receives an award from a charity for girls that Veridian supports.

9:00pm NCIS: Los Angeles CBS - After learning that an agent is in danger, the team rushes to a crime scene.

9:00pm Last Restaurant Standing BBC America - The couples must use local and seasonal ingredients to make dishes that highlight their restaurant concepts.

10:00pm The Bad Girls Club Oxygen - Kate forms an alliance with Natalie, forcing the other girls to call Kate out on being dishonest