Radiohead Raises $572,000 for Haiti with Oxfam America at the Henry Fonda Music Box 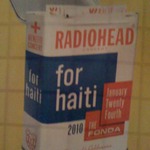 Late Thursday Radiohead announced that it would perform a charity show benefiting the survivors of the devastating January 12th earthquake in Haiti. The tickets were made available via a Ticketmaster auction which ended with a final minimum bid of $475 (meaning many secured their tickets for $450). Some went above and beyond as the proceeds were going to Oxfam America's Haiti Relief Fund and the high bid was $2,000 per ticket (for either 2 or 4 tickets), according to the band.

All in all more than $572,000 was raised in fans' donations and it was an unforgettable, intimate gig for all at the 1,300-capacity theater. Here's the setlist: