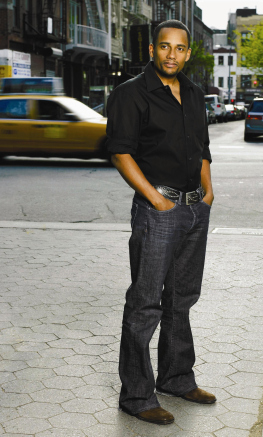 Photo by Keith Major
LA has a diverse cast of characters. Whether it's the characters with stirring stories or interesting occupations or the people who are just simply characters, this town has them all. In an effort to get to know some of those characters a little better, we've created "Seven Questions with..." If you have a suggestion for a future Seven Questions subject send us an email.

Hill Harper is in an award winning actor, best selling author and activist who can currently be seen on "CSI: New York," as Dr. Sheldon Hawkes. Hill, a graduate of Brown University, Harvard Law School and Harvard's John F. Kennedy School of Government, has also appeared in several films including Spike Lee's Get on the Bus and He Got Game and Jordan Walker Pearlman's The Visit .

In addition to his work on the big and small screen, Hill has also authored three books. Hill will be signing copies of his most recent book, The Conversation: How Black Men and Women Can Build Loving, Trusting Relationships today at Barnes & Noble in Encino and tomorrow at Barnes & Noble in Torrance.

Hill took some time out to exchange emails with LAist to discuss his work, his writing, his good friend President Barack Obama and much more.

1) Where did you come up with the idea for your book, The Conversation?
I started to wonder whether men and women even talk to each other. I mean really talk—easily and freely, without reservation—like we do with our friends. I believe the time is now to deal with real issues in the community about men and women and how we are connecting and not connecting. We are growing jaded, cynical, tired, and world-weary before our time. We are expecting less and demanding less, and those lower expectations are making us unfulfilled and taking us farther from each other. The walls between us do not serve us.

2) What do you think you learned from your work on this book and what do you hope readers take away from it?
I would love to see women talking to and asking questions of men, and vice versa, to bring more clarity and peace to the way we deal with each other. And, most importantly, find happiness in relationships.

3) After graduating from Harvard with a JD and MPA, you decided to move to Los Angeles to pursue acting. How did your family and friends react to that decision? How big of a risk do you think this was?
Luckily, my family and friends were supportive of my decision. They understood the importance of me following my passion. Of course it was a risk - taking risks is essential when following one’s dreams. It is so easy to follow the path of least resistance, but if we do that, we will never manifest our destinies!

4) What do you think is the role that helped launch your career?
Spike Lee hiring me as one of the leads of his film Get On The Bus and then hiring me again for his next film He Got Game.

5) What role are you most proud of?
The role I played in The Visit by Jordan Walker-Pearlman. It was based on a true story and I played a man who was in prison dying of AIDS who wanted parole to reconcile with his family. I was nominated for Best Actor Independent Spirit Award that year alongside Oscar Nominee Javier Bardem and Oscar Winner Adrien Brody. I hope to work with more great directors like Jordan and play more roles with that level of depth and complexity in the future.

6) How has your friend Barack Obama's new job impacted your relationship? Do you get to talk to him as much as you used to?
President Obama is a busy man these days, so I do not ring up the White House. I've been there a few times and we are all very proud of him. As he says, the best thing any of us can do to help him and this country is to volunteer and serve in some way to help others who are less fortunate. And I hope I am doing that through my Manifest Your Destiny Foundation.

7) What do you love about Los Angeles?
I love to take advantage of the weather by spending time outdoors on hikes. I also enjoy exploring new restaurants. My current favorites include The Bazaar at SLS and Rivera downtown. Where else can you be in a real city, then go on a mountain hike and then sit and watch the sunset on the beach all in one day?