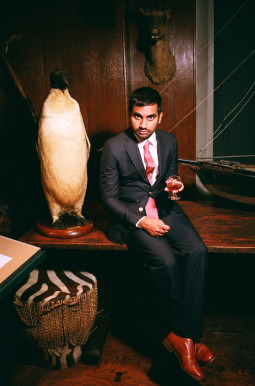 You may recognize Aziz Ansari from his work on NBC's "Parks and Recreation," as one-third of MTV's "Human Giant," sharing the screen with Adam Sandler and Seth Rogen as "Randy" in Judd Apatow's Funny People or on stage as one of brightest new stars of stand-up comedy. For those who don't get out much or don't watch TV, but really love LAist, you may have recognized Aziz from this interview with our own Farley Elliot.

Tonight and tomorrow night, Aziz celebrates the release of his new CD/DVD Intimate Moments for a Sensual Evening, with a performance alongside special guests at Largo.

We had the chance to exchange emails with Aziz who found some time in his busy schedule to discuss Intimate Moments, working with Diddy, Craigslist and Chick-Fil-A.

1) Intimate Moments for a Sensual Evening is your first comedy CD/DVD, how much preparation went into this set?
It was the end of a tour that I did for a few months. So I prepared quite a bit. I also did a lot of pushups every day leading up to the special.

2) This one’s for the ladies. What do you think it takes to make an evening sensual?
A nice meal, some candles, and some D'Angelo. 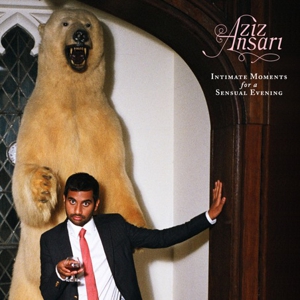 3) You talk about an ad you came across on Craigslist in Intimate Moments, do you find yourself looking at Craigslist ads for material? What’s the most entertaining section on Craigslist?
Not really, I just told that story because I was looking on Craiglist for tickets to a concert once and saw that absurd ad of a guy asking for a woman to give him oral sex for a half hour for concert tickets.

4) Is there anyone you’ve come across in your own life who is similar to Tom Haverford, your character on “Parks & Recreation”?
Definitely. I based some aspects of Tom on some idiots I ran into at the Stern School of Business at NYU. We are also all turning into our characters at "Parks and Rec" by the way. I'm getting more into suits, I saw Nick Offerman the other day at the TCA's and he was at the snack table and he had a plate full of salami! I was like dude - you ARE Ron Swanson!

5) How did the concept for Shutterbugs come about? Was it difficult to find the kids for those sketches?
It was a bit (Rob) Huebel and I did once at the UCB Theatre in NY and thought would be good for a short. For casting the children, Huebel and I just kidnapped children from playground's and filmed them.

That's cool to do right? (They were kids of our friends)

6) On your MySpace page, you lists interests as “Chick-FIl-A and all things Diddy,” I’ll get to the Chick-FIl-A on the next question because it deserves it’s own question, but your next film Get Him to the Greek you star alongside Russell Brand, Jonah Hill and Diddy. What was it like working with Diddy (LAist Interview)? Were you interested “in all things Diddy” prior to working with him or was it a result of working with him?
Diddy was so great. He really killed on set and I was very impressed.

I've been a life long Diddy fan, in fact I'm spraying some I Am King on my neck right now while I pound some Ciroc and lemonade.

7) Back to Chick-FIl-A, I’ve written two posts here on LAist about my love for Chick-Fil-A. Do you make the trip to Redondo Beach for Chick-Fil-A? Have you made any efforts to convince Chick-Fil-A to open a location in LA?
I need to make that pilgrimage to Redondo soon. I'd love for them to open a Chick-fil-a in LA. What is the holdup? Does anybody know? This is going to be my celebrity cause of choice. I know the crisis in Haiti is serious, but let's not forget about the lack of Chick-fil-a in LA.