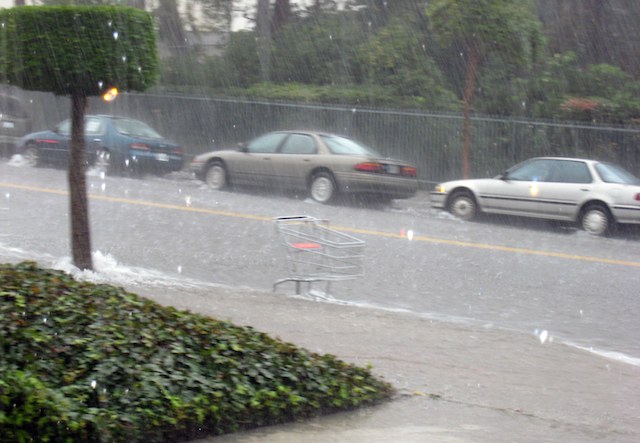 A shopping cart running down the street in San Pedro, as seen around 3:15 p.m. today | Photo by Jimmy Bramlett/LAist

Rains yesterday caused San Pedro and harbor area streets to flood, sending some residents to a Red Cross shelter for the night and prompting elected officials to ask "why?"

"I want to know why it happened. Did our storm drains fail? How can we make sure it doesn’t happen again? I am calling on city staff to answer these questions during tomorrow’s City Council meeting," said Councilwoman Janice Hahn in a statement last night.

This morning she got her answer. During a half hour period, the area received about 1.5 inches of rain. "That's the equivalent of a hundred-year storm or worse," explained Enrieque Zaldivar, director of the Bureau of Sanitation, to City Council this morning. He continued to say that storm drains were twice checked last Fall with no problems identified and that this was just an unprecedented event that overwhelmed the system.

Adding to the fray was Congresswoman Jane Harman (D-Venice). "I am deeply concerned about the how the flooding is affecting San Pedro residents," she said, applauding efforts of fire responders, in a statement from her office in Washington D.C. "I understand that the city government is evaluating preventive measures for improved drainage and storm water management. I will watch this review with great interest to see if there is any opportunity to secure federal assistance for strengthening San Pedro’s flood defenses."