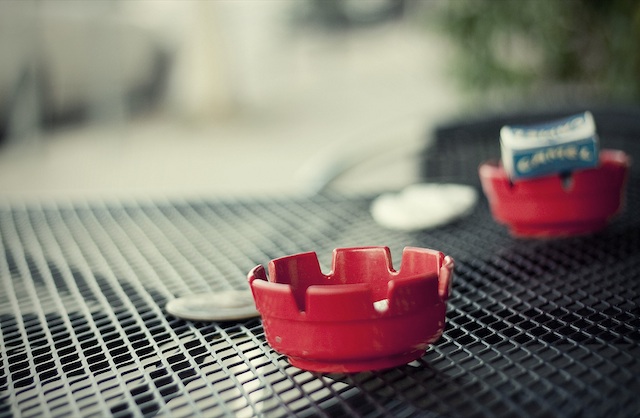 Photo by stephenfalk via LAist Featured Photos on Flickr

In a unanimous vote, the Los Angeles City Council this morning approved a new city ordinance banning smoking near outdoor dining areas. It will go into effect 30 days after Mayor Villaraigosa signs it, beginning a one-year educational grace period before going into full force, likely in February of 2011.

The ban creates a 10-foot perimeter around stationary outdoor dining areas—think patios adjacent to a restaurant and outdoor food courts—and 40 feet around mobile food vendors. Bars, clubs and private events at restaurants will be exempt. City law currently prohibits smoking within 25 feet of playgrounds, bleachers, sports fields and picnic areas. It is also banned outright at city beaches and parks.

Although the maximum fine is $250, city councilmembers discussed how the law will be more self-regulatory than anything else. "That's not the intent of this law," explained Greig Smith, who introduced the ordinance over a year ago. Smith said that police could be called if a restaurant patron is refusing to put out a cigarette, but a roving patrol of LAPD officers ready to ticket smokers is not planned.

For the Record: An earlier version of this post indicated that the law would go into effect 30 days from today. The grace period begins when Mayor Villaraigosa signs the ordinance. However, if he hasn't signed or vetoed it in 30 days, it automatically goes into effect.