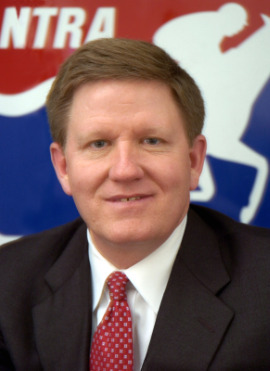 LA is a place for stars to shine, and today Alex is in town to see horse racing’s finest shine at the 2009 Eclipse Awards, recognizing excellence in Thoroughbred racing over the past year.

Tonight’s 39th annual Eclipse Awards dinner at the Beverly Wilshire Hotel in Beverly Hills will announce the results of 17 equine and human categories, ranging from Jockey to Trainer to Two-Year Old Male, leading into the main event, the announcement of one of the most buzzed-about Horse Of The Year honors in history.

Two females horses - Rachel Alexandra and Zenyatta - dominated horse racing in 2009, both going undefeated for the year with Alexandra taking The Preakness and Zenyatta becoming the first female to win The Breeders’ Cup Classic. In advance of tonight’s Eclipse Awards (which will be broadcast on TVG at 5 p.m. PST/ 8 p.m. EST), we caught up with Alex to get the inside track on all things equine.

1) You are in LA for the Eclipse Awards - tell us about them.
The Eclipse Awards are like the Oscars of Thoroughbred racing. The best horses and human athletes, plus top owner, breeder and trainer, are named champion in their category as voted on by writers and racing officials. An Eclipse Award is the highest honor you can receive in the sport.

Zenyatta, shown winning the Breeders' Cup Classic with jockey Mike Smith. (Jae C. Hong / Associated Press)
2) Everyone is talking about who will win horse of the year between the 2 super-fillies - Zenyatta or Rachel Alexandra - who do you think should win?
Honestly, I can make a strong case for either one. There is no right or wrong outcome. Rachel Alexandra waged a historic campaign in 2009 taking on males her own age and even older males, winning against all her challengers. The undefeated Zenyatta became the first female to win the Breeders’ Cup Classic, which is as close as it comes to a definitive championship race in our sport. Even the most opinionated racing observers say that this year’s Horse of the Year decision is the toughest ever.

3) A follow-up question - based on what we know of Zenyatta and Rachel Alexandra, what female celebrities do you think would be right to do their voiceovers in a movie?
For Rachel Alexandra, I might choose Taylor Swift because both are young, precocious and immensely talented. I might also choose Katy Perry because both have succeeded by being unconventional. For Zenyatta, I might opt for Meryl Streep because each of these talents gets better at her craft with age. Madonna also comes to mind for Zenyatta because both are incredibly driven and determined.

5) What are you going to wear to the Eclipse Awards? Before you were the CEO of the NTRA, you ran Churchill Downs. How did that affect your personal style? Who are some of the best-dressed jockeys off the track?
The Eclipse Award is a black-tie affair so I’ll be the standard-issue black tux. Occasionally, racetrack management is unlovingly referred to as the “suits.” I do often wear a suit but my management style is to try and reach out to a broad range of racing fans through personal interaction and through my blog “Straight Up” on NTRA.com.

Regardless of what I wear, I try my best to remain approachable and accessible. As a rule, jockeys are very good dressers, but four of the best are Aaron Gryder, Joe Talamo, John Velasquez and Chantal Sutherland. Chantal has even done some modeling so she knows how to look her best when she’s not working.

6) Horse racing really seems to be picking up steam in popular culture, between “Secretariat” in production, the reality show “Jockeys,” etc. What do you think it is about the sport that resonates with our current fast-paced, digital culture?
Ours is a very fast-paced sport, so there is a natural affinity there. People marvel over the incredible athleticism of our equine and human athletes. The way they work in concert is a thing of great beauty. Our culture also still very much appreciates history and tradition, which our sport also has in abundance. But at the heart of it all is a love of the horse. The connection between horses and humans is deep and long standing. And that connection translates across all kinds of media, including the Internet. Without the horse, we would be just another also ran.

7) What are you looking forward to in 2010 for the sport?
I just found out today that Zenyatta will return this year to race at age 6. What a great thing it would be if she and Rachel Alexandra squared off against each other on the track? I suppose such a showdown would tell us whether the Eclipse voting was correct or not! But another thing every racing fan looks forward to each year are the marvelous, unexpected stories and heroes—like unforgettable longshot Kentucky Derby winner Mine That Bird—that create memories to last a lifetime.

The Eclipse Awards will be broadcast live tonight on TVG at 5 p.m. PST/7 p.m. EST.