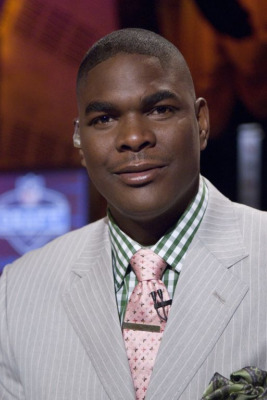 ESPN NFL analyst, Super Bowl winning wide receiver and former USC Trojan, Keyshawn Johnson | Photo courtesy of Old Spice
LA has a diverse cast of characters. Whether it's the characters with stirring stories or interesting occupations or the people who are just simply characters, this town has them all. In an effort to get to know some of those characters a little better, we've created "Seven Questions with..." If you have a suggestion for a future Seven Questions subject send us an email.

Los Angeles native and USC alum, Keyshawn Johnson knows a thing or two about swagger. The number one overall pick in the 1996 NFL Draft brought a Just Give Me the Damn Ball attitude to the game throughout his career. Throughout Number 19's 11 seasons, from rookie year to retirement, he remained one of the most talked about players in the league. The three time Pro Bowl-er and Super Bowl champion, brings the same swagger he had on the field to ESPN's "NFL Countdown" where he currently serves as an analyst.

Keyshawn has fittingly teamed up with Old Spice, makers of Swagger Body Wash, to create the Swagger Rankings, an index recognizing which NFL teams have the Most Swagger over the last three and half years. The Indianapolis Colts topped the rankings, followed by the Pittsburgh Steelers and New England Patriots.

LAist had the chance to talk with Keyshawn about swagger, as well as his thoughts on this weekend's playoff games and the USC coaching change.

1) Why is swagger important in the NFL?
Swagger breeds confidence. A lot of people look at someone with confidence as bragging, ‘look at me, look at me,’ and that’s not true. You walk around with your head up high and feel proud about what you’re doing, then that’s swagger.

2) This weekend we're going to get to see the four teams who earned a bye in the playoffs in action. Do you think the Vikings got their swagger back with their blowout victory over the Giants in Week 17? Do you think the Colts and Saints lost some of their swagger by closing out the season with losing streaks?
I think the Vikings are definitely playing with swagger with that win over the Giants. I think the Colts are the boring-est team in the NFL. I don't think they ever had any swagger. They go about things differently. They're pretty boring to watch. Although they win, they're a boring watch. I think the New Orleans Saints lost a little bit of that swagger that they had earlier in the year once the Dallas Cowboys got a hold of them. The Cowboys are team that's playing with a huge amount of swagger.

3) What are your predictions for this weekend's playoff games?
I think the Jets have a chance to beat San Diego if they do things right, run the ball and play defense. Dallas and Minnesota is going to be a great game, but I got to go with the Cowboys though. New Orleans should be Arizona. Baltimore will probably beat Indy, they've rested for too long.

Keyshawn Johnson caught 12 passes for a Rose Bowl record 216 yards and one touchdown in the Trojans' 41-32 victory over the Northwestern Wildcats in 1996. | AP Photo
4) Back to these Swagger Rankings, how did the Chiefs and 49ers manage to get into the top 15?
When you look at the criteria: If they score in the red zone, least penalties, merchandising sales -- those things help a team get into the Top 15.
So you can make up for a lack of wins with some of these other things.
Exactly. I mean the Colts are ranked number one and you know I wouldn't have had them number one but all the other factors grade high for them. They score in the red zone. They win on the road. They don't make mistakes. All of that is what helped the Colts with their Swagger Rankings.

5) What are thoughts on Pete Carroll's departure from USC for the NFL? How do you think he'll do? What are your thoughts on the hiring of Lane Kiffin?
I think he'll do great. He wasn't a bad coach in the NFL. He went to the playoffs a couple times, won one game and lost two. He definitely has his work cut off for him but he's up for the challenge. He learned from the mistakes he made in the past in the NFL. I'm looking forward to him being successful in Seattle.

We brought in a guy in Lane Kiffin who will implement everything that Pete did and put it right back into place. We'll just move forward from there. I think he's a good hire. I don't care what the people are running around saying, I think it's a great hire. People are always going to have something negative to say, unless you're hiring a Hall of Famer. It's within the family, he knows what to do. As long as he sticks with that, we'll be fine.

6) Would you like to see the NFL return to Los Angeles?
Yes. Soon. Very soon. I really don't which team it's going to be, but yes I'd definitely like to see it happen.

7) How much swagger does Bristol, CT have?
Zero. I'm dreading getting on that plane.