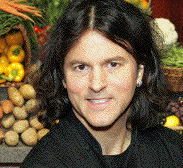 Chef Kerry Simon
Consider it confirmed after weeks of speculation: Chef Kerry Simon of SimonLA will head up the downstairs eatery at the soon-to-open JW Marriott/Ritz Carlton hotel at LA Live. The announcement came late this morning as part of an AEG/LA Live press event held on the downtown entertainment campus, and validates rumors that began to swirl in November when the info was overheard on a DC-to-LA flight then reinforced by a series of Tweets on the topic.

Explains blogdowntown of the new venture: "The restaurant will be one of two in the hotel and condo tower, which will feature an 878-room JW Marriott and a 123-room Ritz Carlton. The L.A. Market space will seat approximately 200, with indoor and outdoor seating, the latter surrounded by a patio water feature."

Rumors of Wolfgang Puck being the man behind the upscale, upper-level eatery in the hotel remain just that: Rumors.