Deposition Reveals Disturbing Tactics: 'After Legalizing Same-Sex Marriage, They Want to Legalize Prostitution. What will Be Next? On Their Agenda List is: Legalize Having Sex with Children.' 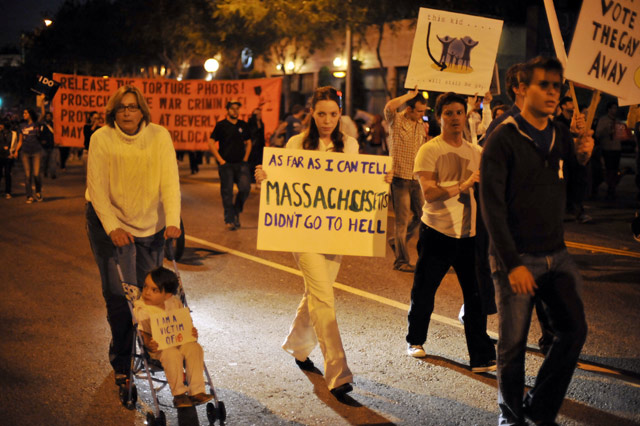 The Day of Decision Protest in Hollywood on May 26, 2009 (more photos here) | Photo by Tom Andrews/LAist

It is now becoming apparent why Dr. William Tam, a defendant-intervener and official proponent of Prop 8, which banned gay marriage in California, wanted to be excused from the trial. He stated that he feared for his life and family in his request to the court last Friday. Today during the redirect examination of Yale Professor George Chauncey (he's an expert on gay discrimination) by San Francisco Deputy City Attorney Therese Stewart, the video taped deposition (from December 1st, 2009) of Tam was shown. Here are some selections:

Question: “And it is your understanding that part of the gay agenda is legalizing underage sex?”

“They lose no time in pushing the gay agenda —- after legalizing same-sex marriage, they want to legalize prostitution. What will be next? On their agenda list is: legalize having sex with children.” (Pro-Prop. 8 email by Tam, page 78 of deposition and full text of email below)

“We hope to convince Asian-Americans that gay marriage will encourage more children to experiment with the gay lifestyle and that the lifestyle comes with all kinds of disease.” (Pro-Prop. 8 media interview by Tam, page 77 of deposition)

“Question: And how did that come to be? How did it come to be that you were part of that debate?

“Answer: I was told by Protect Marriage to take part in that debate.

“Question: What do you remember saying on that topic of children and Prop 8?"

“Answer: Oh, I was saying that if same -sex marriage is legalized, then every child can grow up thinking whether he would marry John or Jane when they grow up.” (Tam discussing his arguments during a Pro-Prop 8 debate, page 73 of deposition)

Also introduced was a pro-Prop 8 letter from Tam:

This November, San Francisco voters will vote on a ballot to "legalize prostitution". This is put forth by the SF city government, which is under the rule of homosexuals. They lose no time in pushing the gay agenda --- after legalizing same-sex marriage, they want to legalize prostitution. What will be next? On their agenda list is: legalize having sex with children. I hope we all wake up now and really work to pass Prop 8. We have only 48 days left. Even if you have church building projects, mission projects, concert projects, etc, please consider postponing them and put all the church man/woman power to work on Prop 8. We can't lose this critical battle. If we lose, this will very likely happen......

1. Same-Sex marriage will be a permanent law in California. One by one, other states would fall into Satan's hand.

2. Every child, when growing up, would fantasize marrying someone of the same sex. More children would become homosexuals. Even if our children is safe, our grandchildren may not. What about our children's grandchildren?

3. Gay activists would target the big churches and request to be married by their pastors. If the church refuse, they would sue the church. Even if they know they may not win, they would still sue because they have a big army of lawyers from ACLU who would work for free. They know a prolonged law suit would cripple the church. They had sued the California government many times before. They sue until they win. They would not be afraid to sue a church. The church would have to spend lots of money in defending the case. The court fight would be long and the congregation would be discouraged and leave --- how long are they willing to shoulder the law suit costs. The church may give in and accept them, their membership would grow and take over the church. Then a righteous pastor would have to leave. Such scenarios have happened in Scandinavian countries. At that time, churches would keep quiet, hoping that they won't be picked as the next target.

If your church is sued, don't expect others to help your church. You would be in the battle alone, and chances are you would lose. If that happens, whatever nice building your church have built now would become meaningless.

In order not to let this happen, we better team up at the current battle to defeat same-sex marriage. Collectively, we have a chance to win. Right now, each church sacrifice a little. For 48 days, delay your projects, put your resources ($ and manpower) into Prop 8. We'd have great power if we pool our resources together. Let's win this battle. After victory, your congregation would be energized and go back to the original projects with joy and cheer. They may want to give more and build a bigger building to thank God. Our God would be pleased and bless us more. But if we lose, our congregation would lose heart. They might not want to work as hard. Our opponents would be overjoyed. They would do more and change more laws so as to persecute us easier. Churchs would have a much much harder time to survive. We would be collecting offerings to fight law suits instead of building new buildings. I pray that day would not come. The choice is yours. Talk to the leaders of your church. Your actions would change the history in either direction.

Thanks for your efforts,