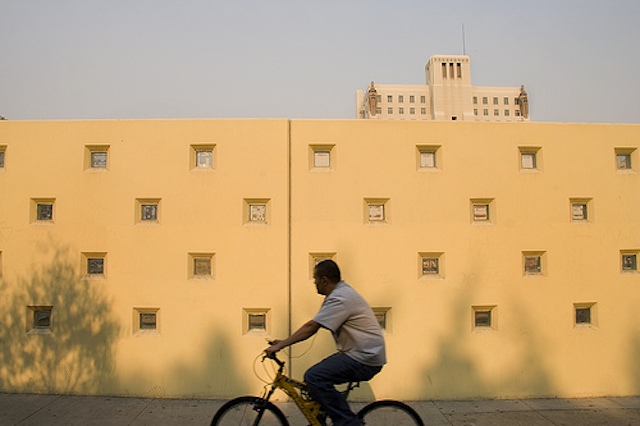 Photo by susan catherine via LAist Featured Photos on Flickr

The City Attorney's office was instructed to recommend options for the creation of a bicyclist anti-harassment ordinance after discussion at the City Council's Public Safety Committee this morning. "Most of what you asked for is already within the law or the state jurisdiction," said committee chair Greig Smith, explaining that the city has limited authority over vehicle codes.

However, there are a few things that are not within city or state law yet, explained Michelle Mowery, the city's Senior Bicycle Coordinator. "For instance, a number of states have enacted three-foot passing laws... We don't have that in the state of California," she said.

Deputy City Attorney Jude Real agreed with Smith on a local ordinance: "It may not be as specific as people would like."

Smith said a municipal code on the books would only work if an officer witnesses harassments of a cyclist. If the city wants to see a strengthened law, the city council should sponsor new state legislation.

During public comment, Ted Rogers of the blog Biking in LA, explained why this law was needed, concluding with a chilling e-mail threat sent to a friend of his. "If i ever have the chance of hitting one of you and getting away with it, I'm going to do it," the e-mail said.

"This is not a unique threat," noted Rogers.

City Councilmember Tony Cardenas agreed that biking in the city is tough. "Unfortunately when you ride a bicycle in the City of Los Angeles, you're taking your life in your hands," he said.

"Traffic in Los Angeles is getting worse, not getting better," added Councilman Dennis Zine, a former police officer. He said creating a municipal ordinance would send a good message, "but the fact of the matter is that we are not a bicycle friendly city," he opined, citing the culture and roadways.

In defense, someone in the audience poignantly responded, "we can't just continue to cater to motorists."

A date was not set for when the City Attorney should report back.

Added: Damien Newton at Streetsblog LA is not pleased with how things proceeded.