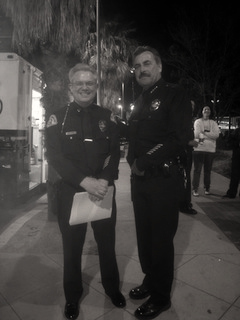 Chief Charlie Beck, right, poses with Captain Phillip Trotter, left, of Valley Traffic Division
On New Year's Eve, LAPD's Valley Traffic Division hosted a party of its own in the NoHo Arts District. Located in the northbound traffic lanes on Lankershim Boulevard next to the Metro Red and Orange line stations was a license and sobriety checkpoint. New Year's revelers found themselves in slower than normal traffic as police stopped every fifth car (and any other suspicious ones) to check for a license and any signs of inebriation.

LAist has a penchent for publishing these checkpoints—they have been weekly in the last few months—which has been cause for debate among readers. Some are very appreciative of the heads up, others fear it aids drunk drivers in getting away with it. To Chief Charlie Beck, who showed up New Year's Eve to support his rank and file officers, he's happy to see the publicity and answered a few questions of ours about it.

For Beck, the existence of checkpoints is about more than a handful of arrests, it's about a change in behavior. "That's what changes the way people think of their behavior and the consequences of that behavior so I'm very much in support of them," he explained. "And I support the publicity that surrounds them." 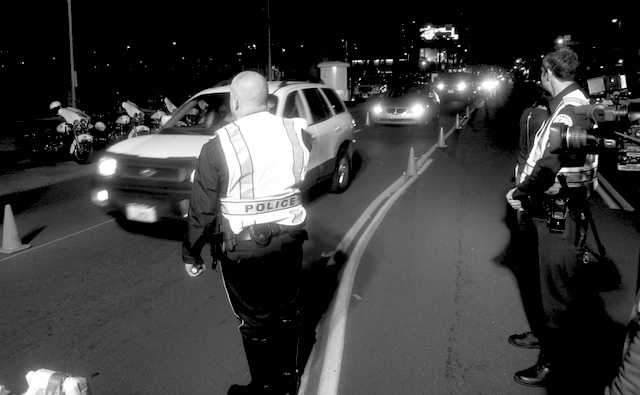 Cars along Lankershim Blvd. at a checkpoint on New Year's Eve 2009 in the NoHo Arts District | Photo by Zach Behrens/LAist

So you don't mind when the press publicizes them?

"No, not at all," Beck said. "People having foresight aren't the ones who are committing this crime. People who are thinking ahead aren't the ones that this checkpoint is likely to catch. I think that the publicity surrounding these things is so important that if you give a couple of locations, that's fine."

A couple of locations? You don't have to announce them all to the public and press?

"No," he said, "just that we're having them, that's the most important thing."

For example, the LAPD announced two checkpoints for New Year's Eve in NoHo and on Hollywood Blvd., but according to Twitter users, one was located at Sunset and Crescent Heights boulevards. A 1993 ruling by the California Supreme Court said that advanced publicity was not necessary but should be an important factor to consider.

When the press announces locations, what do you prefer?

"I would prefer it a little broader," he said in reference to publishing exact locations instead of by neighborhood or area. Beck, however, concedes that the publication of exact locations is something he won't cringe at. "You have to do your job, which I need to do my job. So, you know, there's a way both sides to get what they want out of it."
----------------
Earlier in the conversation, Beck said something that we felt summed up the issue as he sees it: "The publicity is more important to me than the location because your goal is not to just get people who drive on this street, your goal is to affect behavior citywide."

Since speaking to Beck, we experimented over the weekend with adjustments to how we announce DUI Checkpoints. Instead of publicizing the exact location, we went with the more general neighborhood area and added that officials do not have to announce locations, therefore, more checkpoints could be out there. As always, this is a conversation and LAist is not married to weekend examples. Chime in below and let us know what you think about Beck's comments and LAist's approach over the weekend.