Who's Got the Best Burger in the Valley? 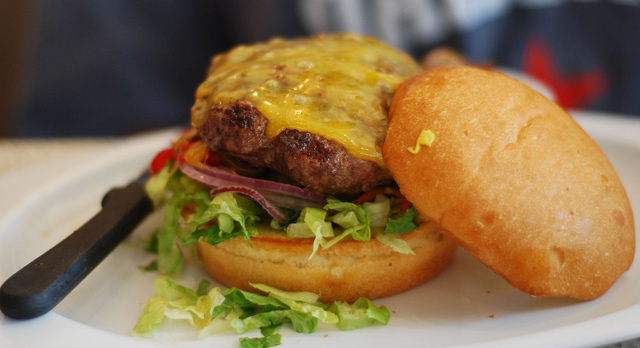 When you're good, you're very, very good... (Photo by Malingering via the LAist Featured Photos pool on Flickr)

A few days ago we asked for some input on a very serious issue: Who's got the best burger in the Valley? The results were pretty diverse, including the non-carnivore options, and the occasional lapse of awareness of local geography (err, sorry, Stout and 8oz aren't in the Valley), and a range of answers pointing to mostly burger stands and more casual neighborhood joints. While we suggested The Counter in Studio City, commenter AJ remarked that the build-your-own high-end burger spot "is too hit-or-miss for me but when it's good, it's GREAT," adding a pick for a fave: "But all in all, I really think my favorite burger in the valley is at Stanley's on Ventura Blvd."

Other meat-based picks included Steve's Burgers in Burbank near Victory & Buena Vista; Henry's Hat (in the Cahuenga Pass—the almost Valley?); the gorgonzola bacon burger available as a special at Fab Hot Dogs on Tampa at Vanowen; Jack's Classic Hamburgers in NoHo (especially the bacon cheeseburger); ostrich and bison burgers from Billy's Grill in Van Nuys; the posher fare of Laurel Tavern (we like their grilled cheese, at least!); and Kerry's Cafe in Valley Village.

Back to The Counter for you, say some; in fact, just yesterday we noted it happens to be on a list of 7 restaurants where meat eaters and green beans can both eat well. LAist readers spoke out, too, suggesting the best in the Valley between two buns can be had at Leonor's Vegetarian Restaurant in North Hollywood, while commenter Celaphane raves: "Follow Your Heart has the best Veggie Burger... hands down!"

So...what did we miss? And where did we go astray? Help us find the best burger in the Valley--keep those comments coming!