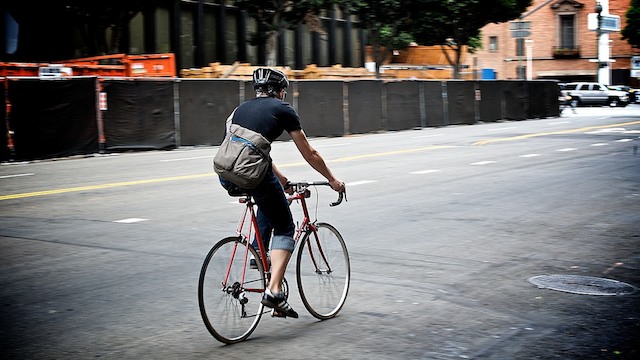 The controversial Bicycle Draft Plan for Los Angeles has just earned itself another FAIL badge. As part of the vetting process for any large plan, the public is allowed to make comments after reviewing documents. Too bad the non-internet public is out of luck. Copies of the 563-page plan are supposed to be a nine designated libraries, but as Mayor Villaraigosa's Bicycle Advisory Committee appointee and current Chairperson points out, copies are no where to be found.

"Six out of eight regional libraries could not find either the Plan disc, the maps, or neither," Bailey wrote in a e-mail scolding Councilman Bill Rosendahl, who said nine copies would be placed in libraries at a December 9th bicycle transportation meeting. Even if Plan discs were available, city libraries have disabled C: drives, according to Bailey. "I have contacted each and verified that NONE have received the promised hard copy," he continued, noting Rosendahl's promise was three weeks ago.

Originally, the public comment period was through November 6th, but was extended to January 8th after complaints that the period was too short, leaving little chance for community groups and neighborhood councils time to review and provide comment.

"Clearly this is unacceptable for the many Angelenos who do not have high-speed internet connectivity to accommodate the downloading of such a large document or for those that don't have personal computer access," said Bailey.

It's almost like city employees do not care about the plan. Could this incompetent example of leadership within Los Angeles' bikeways office once again delay the draft plan?