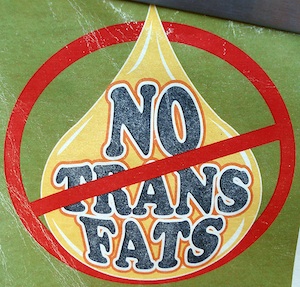 Photo by Mykl Roventine via Flickr
New York City, Boston, Philadelphia have all done it, but California this week will become the first state to ban trans fat from restaurants. Assembly Bill 97, which worked its way through the state legislatures and signed by Governor Arnold Schwarzenegger in 2008 finally becomes law New Year's Day, reports the Sacramento Bee.

Some call this a "nanny state" move, others say it's an important step. "This was an ingredient that was already being phased out, for the most part. I think most restaurants have had adequate time to comply," said Daniel Conway, spokesman for the California Restaurant Association, which opposed the law, in regards to the one year grace period given for restaurants to adjust. Bakeries still have until 2011 to comply with the law.

Republican Irvine Assemblyman Chuck DeVore is not thrilled. "Not every human problem deserves a political solution," he said. "That's the fallacy my colleagues engage in."

Perhaps the best idea is one that's somewhat already in play. Judith S. Stern, professor of nutrition at the University of California, Davis, suggests that all restaurants label calories so diners make the final decision.