LAist Spends an Afternoon with Diddy and CÎROC 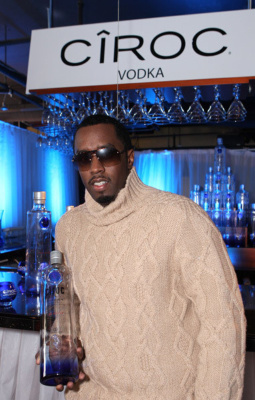 LAist spent an afternoon with Sean "Diddy" Combs | Photo courtesy of CIROC
Usually a statement like "he's got more jobs than names" wouldn't be impressive at all, but the man whose birth certificate reads "Sean Combs" has had a lot of names. He's been called Sean "Puffy" Combs, Puff, Puff Daddy, Puffy, P. Diddy and Diddy. After spending an afternoon with the mogul of many monikers, I thought of another name for him — Santa Claus.

No, Diddy has not packed on any pounds, he's not sporting a new beard and the "Bad Boy for Life" hasn't suddenly become holly and jolly. But after spending an afternoon with him, I did find out that Diddy does enjoy a plate of cookies and milk — just like St. Nick.

Recently I was given the opportunity to interview Diddy in person while he spent some time in LA preparing for the holidays and a new year that promises to be a big one for his new group "Dirty Money" and his line of vodka - CÎROC.

Minutes after taking my seat in the second floor lounge of Katsuya in Glendale, while waiting my turn to talk to Mr. Combs, a familiar voice could be heard requesting that one of staff members bring him "Chips Ahoy and milk."

There were plenty of platters of Katsuya's famous sushi to be had for all those in attendance but Diddy was interested in getting his hands on the same delicious meal kids leave out on Christmas Eve. Less than ten minutes later, a young staff member reappeared like a ninja carrying a bag from Rite Aid containing, as Diddy requested, Chips Ahoy and milk. The cookies were placed on a plate, milk poured into a large glass and delivered to a booth in the back of the lounge.

It was at this moment that I realized, "Diddy's like Santa Claus, but better."

The big guy from the North Pole's got elves and reindeer, but how much are they going to accomplish? Diddy, on the other hand, has a team. It's a team of driven, ambitious, tech-savvy go-getters. As I waited, I took a tally and counted more than half of the people present at this private function could say they "Work for Diddy."

Unlike Santa, Diddy's workshop is mobile. A sushi restaurant in Glendale isn't exactly ideal for running a worldwide enterprise but his staffers make it work. Bluetooth headsets are lit, laptops are opened and BlackBerrys are buzzing.

I can see one laptop screen opened to Diddy's Twitter feed. He's got over 2 million followers, I'm guessing there's a multitude of mentions and messages sent to @iamdiddy that need to be seen by someone.

Another staffer can be overheard speaking on his Bluetooth with the ticket office of an NFL team. He's giving them a "thanks but no thanks" for the passes being offered to his boss by their star quarterback -- Diddy's too busy promoting his music and his beverage.

Diddy's always busy. On this particular day with cameras and microphones in his face, he still found time to get on his phone to send out emails or text messages. He never stops.

After an hour of waiting, it was finally my turn to sit down and talk to Diddy. The time spent observing the men and women who make Sean Combs the man, myth, and legend that he is were so entertaining and educational that I contemplated turning down the interview just so I could continue to watch the workshop in action. That would be crazy though. I didn't drive all the way to Glendale to NOT talk to one of the one of the most famous personalities and powerful moguls in the world.

A staff member brought me to a booth in the back, briefed me on what we were here to talk about (the holidays, CIROC and the new album) and then introduced me to Diddy. After a handshake, the man I've been waiting to talk to sat down across from me and fittingly pulled out his phone.

I waited for him to finish typing his message but he didn't want me to wait, "come on, I'm ready." he calmly informed me. "Oh, right. Sorry," I replied. and then proceeded to interview him. Clearly, I couldn't be a part of the team I just observed for an hour; I could not work for Diddy but I'll ask him, just to be sure.

LAist: You're known for throwing incredible parties, maybe you can give some advice to our readers on throwing a holiday party. If someone's throwing a holiday party and they've invited you, how can they make sure Diddy isn't leaving the party early?
Diddy: I would say the most important thing is the atmosphere. Keeping everything positive. You gotta have the CIROC flowing. The music's has to be right. Playing the wrong music will have me saying, 'I got to go to my aunt's house right now.'
LAist: Does it have to be your music?
Diddy: No, you don't have to play my music. They have to have CIROC though.

LAist: You are incredibly popular on Twitter. Do you know of any success stories from other artists or brands as a result of an endorsement from you on Twitter?
Diddy: People know I don't really endorse a lot of things on Twitter but probably the Mos Def album. I was going crazy on how great the album was and I think that gave it a lot of exposure and introduced it to a lot of people. I mean I'm not responsible for the success but I heard that it was helpful. Also, when Sal (Masekela) ran the marathon, I was able to shed some light and help him raise some money. It's been a positive experience with Twitter.

LAist: What can we expect for Diddy and CIROC in 2010?
Diddy: For CIROC in 2010, we're coming out with flavors - redberry and coconut. You know how when vodka's have flavors they don't really taste good? With these flavors, I went into the lab myself and I promise you these are the best flavors I've ever tasted. It's really going to change the game of the vodka industry, especially the coconut -- that's never been done. Trust me when I tell you, it's really incredible. Also we're doing like, you remember the Pepsi Challenge? We're launching the CIROC Diddy Challenge online. Blind taste tests. We're challenging people to do it at home. We want to go against their favorite vodka and see which vodka is the smoothest. We're the smoothest vodka in the game.

LAist: You've described the new album, Last Train to Paris, as "electro-hip-hop-soul funk." What inspired you go in that direction for the new album?
Diddy: The influence comes from me being in the dance music world and doing stuff with Felix da Housecat, Erick Morillo, Deep Dish, DJ Hell and being in Ibiza and DC10. Some of the programming to the music is influenced by that but it doesn't sound like dance music. I think maybe people take the "electro" word too far. It's really just a fusion and it's really just great music. It's innovative, it's new and it's refreshing.

LAist: In the single "Angels" you use Jay-Z's "Where I'm From" beat. Was that a beat you knew you always wanted to do something with?
Diddy: I always loved that beat. You know it was produced by my team, The Hitmen, for Jay-Z so we had some involvement with the original but it was always a beat that was so hard to me that I wanted to definitely do something with.

LAist: What would I need to do to work for Diddy?
Diddy: For someone to work for me they have to have passion but most of all they need to have follow through and accountability and they have to take responsibility. So many times in the workplace people don't take accountability. They pass the buck and they don't follow through on things in a timely manner. I think that right there is the biggest thing I'm looking for.

LAist: What are some things you look forward to doing when you're here in LA?
Diddy: My kids live here so spending time with my kids. I probably get more rest when I'm here because the clubs shut down earlier here. In New York I'll be out until 6 in the morning and have to be at a meeting by 9.
LAist: Any particular spots here in LA you like to go to?
Diddy: There are so many spots that open and close. But I like Voyeur, Playhouse, Guys & Dolls.

LAist: Thank you for taking time to talk to me. Before I go is there anything else you'd like to mention to our readers?
Diddy: Yes, I'm launching a new drink I want everybody to try. You have to get Ocean Spray White Cran-Peach and CIROC for the holidays. Trust me when I tell you.
LAist: Does that drink have a name?
Diddy: It's called "Dirty Money."