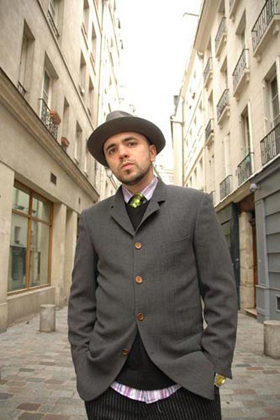 Hawksley Workman
Hawksley Workman just may be Canada's best-kept secret. The Juno Award-winning musician has already released 10 records and has gained a following across Canada, Europe and Australia.

He recently returned to the US to play his first LA gig in three years. Reviews of his live shows tend to be effusive, and at the Hotel Cafe he lived up to the press. Like his albums, his request-rich set traversed genre, and he proved yet again that his versatile voice can do pretty much anything. Between songs—and even occasionally in the middle of them—he kept the audience laughing through stories about songwriting, relatives and transportation.

When Workman sat down with LAist after his set, the midnight chat covered such topics as the songwriting process, the evolution of car design, "Croc-offs," and the long-awaited release of his debut album (For Him and the Girls) in the United States.

It's great that For Him and the Girls is finally being released in the US—even though it took 10 years to get here! How do you view that album?

That record was a pivotal moment in my life. At the time, I was just a drummer for hire and I pretty much made that record to spite a girl. (laughs) Then all of a sudden—in Canada and parts of Europe—it became a bit of a cult favorite.

Is it strange to revisit this early phase of your career?

This job is funny because your career becomes this thing that illustrates these watershed moments in your life—they're more vivid somehow and far more emotional than any photo album could ever be. It's like these songs were written from such a specific time and place. With a lot of it, I don't even understand who that person was. I guess that's a testament to how a person changes if they're given the opportunity to do things and live their life.

Around the time that For Him and the Girls was released a decade ago, you placed classified ads in the Toronto weeklies—featuring poetry that was later turned into a book. Is there any chance you may do something clever like that to coincide with the release of this album in the US?

It's funny because I had a lot of time on my hands back then to think about stuff. I was really poor and all I wanted was to make sure I could pay my rent with my songs. So I came up with the idea of putting those bits in the weeklies, then it turned into a book. I still come up with ideas, but it's not always about marketing my records. Right now I'm developing a cooking show and another live music television show in Canada.

You've also worked extensively as a producer. What's one piece of advice you would give singer/songwriters who are just starting out?

I wish they would teach us this in school or something, but the thing is—you never make your first record ever again. When I look at that first record, it's a bit daunting to me because naiveté can look a lot like bravery or courage, when it's really just naiveté.

Have the songs evolved a lot over the last 10 years?

Yes, only because I haven't listened to the album and we've played almost 700 shows plus rehearsals. I've probably played "Safe and Sound" 1,500 times. After playing it for so long, it's turned into something new. That song has taken on a life of its own. I always get e-mails from people saying they used it at their wedding…

And that track was used in a car commercial, right? You seem to have a car theme throughout many of your songs.

Yeah, that was used in a Volvo ad. I'm a car fanatic and—thanks to my dad's love for cars—my brother and I grew up being able to identify the years, makes and models of British and European cars. I think car shape is more indicative of a society's place in fashion than anything else. I can always tell the age of a car just by the way it looks—by the cut of its lines. Cars are locked into their time.

For me, it seems a bit harder to identify the ones from the last 10-15 years.

As of late, most cars started to be shaped similarly because aerodynamics became a consideration due to fuel economy. So cars started getting bubbly. But even in their bubbly-ness, even when car companies started to amalgamate, certain design characteristics have remained. I'm a design fanatic. I love good design, whether it's a car or a piece of furniture. 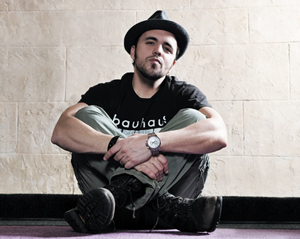 Hawksley Workman
Although many people come up with a song title after they've written a song, you've said that you often write the song title first, then the music and lyrics follow. But in addition to that, do songs ever emerge as a result of your surroundings or a particular instrument?

Absolutely. All of the above. I keep titles on my phone and there are mountains of them. And often, I'll land in a place and I can just feel it. You can feel a vibe and the words are always there; the melodies are always there. I don't test my faith with those things. I just believe that they're going to be there and I write.

I've heard it said that sometimes the brilliance of many pieces of art lies in the energy—in the rapid strokes that don't allow for hesitation. Would you say that describes your songwriting process—rapid and without hesitation?

Probably, which is just a failing of my character. (laughs) I've worked with artists who labor over stuff. I produce their records and I see them wrestle with lyrics and I think, "Wow, that's just amazing!" Inevitably, they come up with a better lyric than what they originally had and I realize, "That could be me." But songs to me already exist. I just need to put them in a container and ship 'em out.

Earlier, I overheard a musician telling you that your album (Last Night We Were) The Delicious Wolves changed his life and made him want to become a musician. Is that something you hear a lot?

A number of people have told me they've used that record as a template for their own work. Everybody would like to think that their most recent record is the best, but there are moments from the past that stand out, and that was a big one. Back then, I had confidence that I could beat the system. And for a moment, I did. It was a fluke, and people were saying, "How did that guy have a hit song? He didn't even check in with the concierge."

What was the songwriting and recording process like for "It's Not Me" on your recent album, Between the Beautifuls? There are so many guitar textures throughout that track. Does something like that come together in the studio, or is it in your head when you're writing?

It comes together in the studio, and even that is just a no-brainer. Whatever comes out of my hands first is what I usually accept as the right thing. Your body always knows more than your head. Your head just starts fucking things up. Especially in rock 'n' roll.

Do you prefer studio work or performing live?

These days I prefer being at home more, because I'm really tired of traveling. It's such an old man thing to say. I'm a morning person, so I like working from nine to five. But I have this job that keeps me awake and I'd like to be in the studio more. I do love performing; I just wish I could play a show that starts at 11 in the morning, instead of 11 at night! 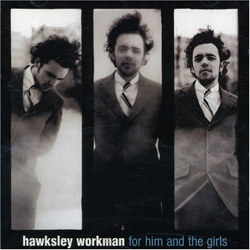 Hawksley Workman's debut album is now available in the United States
I was also interested in some of the work you've done with schools and choirs. Have you ever had them sing on one of your records?

No, other than talking to schools, I haven't worked too much with them. But many choirs sing my stuff, and sometimes that surprises me because I swear in a lot of my songs! The choirs sing a lot off the Christmas record. That's a special one and I still listen to it. It was really an amazing moment in time, and it was written and recorded within a week.

Might you ever record a song in French since you've spent so much time in France?

Probably not, because I'd be very embarrassed. I believe that when a language starts to unfold itself, you understand the nuances of it only after having spent many years with it. So I don't want to be a tourist in French. I have a great deal of respect for the French and their language. I wouldn't want to mess it up.

As you mentioned earlier, you travel quite a bit. What are some of the most memorable moments you've had on the road?

We had a plane that was hit by lightning as we were leaving Heathrow, and I thought we were going to die.

There are a ton of stories. I think the fact that we're in a job that takes place at night, and there's a lot of drinking around it, means there's more weird stuff that happens than at your everyday office job.

What's been one of your favorite places to visit?

We had a lot of fun in Norway for some reason, especially in this city called Bergen, which was just angelic. It's a splendid place.

This is a bit off-topic, but I can't help but ask: What's the story behind the Croc-ish shoes you're wearing?

I bought these shoes for $4 the other day. I'd bought another pair—some fashionable shoes—for a photo shoot and was starting to go nuts because they were hurting my feet. So I found these and I think they're absolutely terrible-looking, but they're so comfortable. Yeah, I'm that guy now. And the funny part is that they're not even actual Crocs; they're dollar-store Croc knock-offs—Croc-offs!

Awesome! Getting back to travel and such, now that you're in town, what are some of your favorite places to eat when you're in LA?

Well, I love Swingers, and there's a sushi place at the Gower Gulch that I go to all the time.

Do you promise it won't be another three years before you return to Los Angeles?

I promise, and I'm hoping to do some shows in 2010. There are certain places I visit that alter me when I land or when I leave. Australia is one, because I always come home with a new mandate. And there's something that happens when I land in LA. I find the energy in California to be very particular and very special, and I feel it as soon as I arrive. As an person from the East, I'm probably supposed to play it cool and say, "Oh, I don't like LA, it's too surface," but I absolutely love it here.

Thanks for speaking with LAist, Hawksley!

Hawksley Workman's debut CD, For Him and the Girls, was recently released in the US and is available from online retailers and via iTunes. To learn more, visit his MySpace page and www.hawksleyworkman.com.

Hawksley Workman - "The City Is a Drag"

Hawksley Workman - "Jealous of Your Cigarette"