The Mysterious Disappearance of John Lennon. His Star, That Is 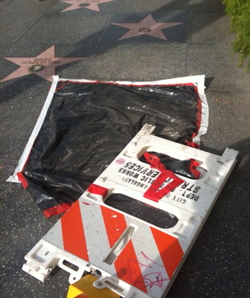 Photo via Beatlestweets
Over the weekend LAist received an email tip regarding John Lennon's star on the world-famous Hollywood Walk of Fame. It seems that at 1750 Vine Street the spot "is covered up with a trashbag, and beneath that is an empty outline of a star," prompting Lennon fans on the Beatlestweets site to claim the assassinated Fab Four member's star is "missing."

So what's become of Lennon's star? Speculation seems to be centered on damage to the terrazzo and brass star, which was dedicated on September 30th, 1988, necessitating its full removal from the sidewalk, or its possible removal to prepare the area for the addition of Ringo Starr's star. Starr is one of 28 celebrities who will be honored in 2010 with a place on the Walk of Fame on February 8th, kicking off the Walk's 50th anniversary.

The Walk of Fame is managed and maintained by the Hollywood Chamber of Commerce, who accept nominations up until the spring for the following year's honorees, and announce dedications about one week ahead. A call to the Chamber regarding the status of Lennon's star, however, yielded us zero information. It seems the only person in the office who knows what's going on with the Walk of Fame is on vacation until January 4th. Until then it seems Beatles fans will just have to "Let it Be."