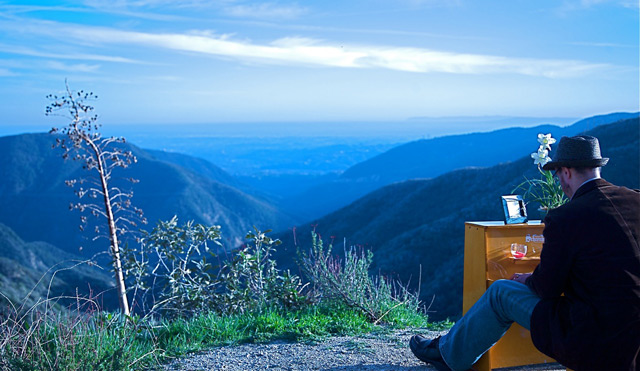 When LAist interviewed Brandon Schott last year, he related the story of his battle with cancer and the charity efforts that arose from his struggle. This year, he released his third album, Dandelion, which was written during the time of his diagnosis, treatment and recovery from a stage three germ cell tumor. He recorded this hope-filled album in a Glendale church over the course of three months.

Schott continues to be active in charity work, and Friday night at Molly Malone's, he and other singer/songwriters—who are also cancer survivors or advocates—will raise funds for the I'm Too Young for This! Cancer Foundation. The Turning Toward the Sun benefit will begin at 7 p.m. and will also include a silent auction, door prizes, drink specials and more. LAist caught up with Schott yesterday for a brief chat about his new album and tomorrow night's charity and outreach event.

How was the process of writing and recording Dandelion different from your previous efforts?

Dandelion will always be a one-of-a-kind record for me for a couple reasons. My other records both had long gestation periods, both in the writing and in the production. I wanted this project to be very immediate, raw, and a little rough around the edges—and more than anything, born of a moment. I've also never written and assembled an album as a direct result of a specific experience like this. The record was recorded—mostly live—over the one-year anniversary of my cancer treatment and recovery, so it was very informed by that chapter in my life.

What inspired you to record in a church?

The songs all had a very strong spiritual pull to them, and I really wanted to create in a space that supported that energy, more so than a studio might. It was a dream recording there. These songs were like prayers for me during a very trying time, and I think the sound of Dandelion reflects that. The whole feels so much larger than my own part. And to hear these songs reflected back at us in that room was incredible. Plus, how cool is it to have six room mics open for every overdub?

Is it true that you won an award for the album?

Yes, I was honored to be presented with an award for my song "Fire Season" in the best folk/acoustic category this year at the Hollywood Music in Media Awards. My co-writer on the song, Chris Holcombe, and I went to the ceremony on Nov. 19 and it was a wonderfully surreal experience—the red carpet, the backstage chatter, the completely incoherent acceptance speech I gave…

I was very flattered, and I was also happy Joan Rivers wasn't there to critique my wardrobe! If I'd known I might win, I would've dressed up a bit more!

What did you wear?

Getting into the live event and the charity a little bit, what role did I'm Too Young for This! (also known as i[2]y) play in your recovery?

I became aware of i[2]y during my recovery sometime in 2008, when I was still in the midst of trying to understand everything that had happened and what I might be able to give back on the other side of it.

A friend of mine, Denise Vasquez—another young adult cancer survivor and musician—has been involved with i[2]y for years and was in the process of helping founder Matthew Zachary put together a fundraiser CD of survivor and survivor advocate musicians.

I was so moved by the generous outreach they offered to patients and survivors of my age group, and I felt like my voice had a natural home with them. The relationship kind of blossomed from there and in May 2009 I performed at—and helped out with—their event here in LA, Cancerpalooza.

They've been an amazing source of courage and inspiration to me, and I hope that by offering up my music through events such as these, maybe I can help others find a light in dark times.

Are all the musicians in the showcase cancer survivors?

Tony B and I are survivors, and someone very close to both (echo echo) and Steve Wallack went through treatment recently. We all have a direct connection in common.

I always felt through my own journey that while I may have been the one medically diagnosed, my whole family…my friends…we all went through this together.

That's one thing I think is beautiful about i[2]y. It stands as a testament to the idea that nobody has to go through it alone—that there are others who understand and want to help.

What kinds of items will be included in the silent auction?

There will be various music and entertainment items (CDs, box sets), books, art pieces, photography, some wellness packages (yoga, massage, etc.), and more items are still coming in. There will be plenty of fantastic holiday gift ideas, and it will all benefit a great cause!

Thank you for speaking with LAist, Brandon!

Turning Toward the Sun will begin at 7 p.m. Friday night, Dec. 18, at Molly Malone's. Tickets will be available for $10 at the door, and all cancer survivors and patients can get in for free. Click here for information about I'm Too Young for This!

Check out Brandon Schott's music at www.brandonschott.com and www.myspace.com/brandonschott. The Molly Malone's event will also serve as the CD release party for Schott's third album, Dandelion, which is available now.