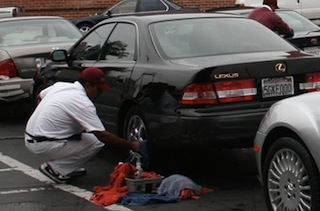 The car wash, located near Alvarado at 2028 Sunset Boulevard, allegedly has been paying employees $6.32 per hour (state minimum wage is $8.00), not paying employees when there were no customers and not paying overtime. Owners are said to o alshave paid employees in cash with no record keeping in order to avoid paying into state funds and taxes.

[UPDATE: An e-mail from the apparent new owner reads as follows: "My name is Andrew Park and I work for the Sunset Auto Spa. Regarding the AG's lawsuit against Auto Spa Express, please see taxihopscotch's comment under your post. We are new owners as of 8/17/2009. Unfortunately, our new owners chose the name "Sunset Auto Spa" which resembles the former name of 'Auto Spa Express' too closely, but we are a different company! The lawsuit was filed against the old owner."]

"Most companies in California comply with state wage and benefit laws, but if you're running a firm that's exploiting your workers in this economy when people are desperate for jobs, we want you to know that we will find you, we will stop you and we will file some of the toughest legal actions in the nation against you," Brown warned.

$630,000 in unpaid wages for the company's workers is sought in Brown's lawsuit in addition to assessing $2 million in penalties for violating California's Unfair Business Act . He is also seeking an injunction to prevent the defendants from committing similar violations in the future.