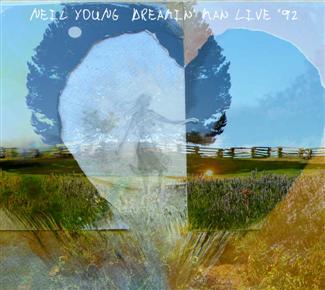 After twenty years of missing deadlines on the Warner Bros. release schedule, Neil Young finally issued his long-promised Archives Vol. 1 1963-1972 set earlier this year, a mammoth collection of studio recordings both familiar and previously-unheard, along with four live shows from his early years. Fans have been eagerly awaiting the next live set in the series, which if we’re working in chronological order, should obviously be from one of the tours Young did in 1973, two journeys across America and the UK which found him at his most completely unhinged. Instead of doing a simple victory lap for the massively popular Harvest, Young instead subjected his audience to unfamiliar and jarringly loud songs, some of the most unyielding he'd ever write, which would later form the basis of the albums Time Fades Away and Tonight’s The Night. Poorly received by audiences hoping to mellow out to the dulcet tones of “Heart Of Gold” and “After The Gold Rush”, the music performed in that period still endears him to a large number of freaks who pore over badly-recorded bootleg tapes to catch a whiff of the Youngian essence at its funkiest.

But once again, instead of giving us something that might reasonably be expected based on what you already know about him, Young’s taken a left turn at “Albuquerque” and skipped the needle ahead twenty years. Dreamin’ Man Live '92 (Reprise), is instead a collection of recordings from the 1992 solo tour that preceded the album Harvest Moon. Recreating the entire album in sequence, it’s an inviting alternative version that often outperforms the immaculate, elaborately arranged studio LP.

Just as it had been nineteen years earlier, Young’s star was on the rise, following a thrilling return to rock with the louder-than-hell Ragged Glory, and a widespread embrace from grunge-educated youths. Again playing brand new songs for a crowd that wanted his greatest hits, he defied expectations by turning down instead of up. “I went out there and played all new stuff - songs that really meant somethin’ to me, “ he told his biographer Jimmy McDonough. “And they were still lookin’ at fifteen, twenty years ago, even though they were teenagers… They didn’t get what they wanted. But I got what I wanted. Because I went out there and did the songs and got in touch with what it’s like to play and communicate with an audience just with guitar, with songs they don’t know that well. That’s where it really lives.”

Harvest Moon would turn out to be one of Young’s most deliberately crafted studio creations, a left turn for a guy known to bash out records in less time than other bands spend setting up the drum set. But perseverance paid off with his biggest commercial hit of the 1990s. It’s the overt next step in a series of records that includes Comes A Time, Old Ways and the inescapable Harvest itself, a certain type of record that Neil makes with his Nashville cohorts. It’s an escape from the chaos of Crazy Horse, a chance to get a good sound on the drums and have the whole band in time and in tune for once. The vocal harmonies are always splendid, and at their best, they really serve a certain part of Young’s creativity. But they miss the edginess, the teetering between glory and destruction, present in so much of his other work. Here, facing an audience that doesn’t really want to hear them, the Harvest Moon songs take on a different quality than their studio counterparts. “These songs lend themselves to solo performances,” Young told McDonough, and he’s not wrong.

Unable to coast on the comfort of familiarity, Young pours everything he's got into the music. The performances are heartfelt and immediate, the songs still close enough to their moment of conception to retain some surprises. The tender, dreamlike "Such A Woman", played as a lullaby on the grand piano, seems to stop time with its tempo just one or two notches above complete a standstill, Young's voice cradling the sentiment with care. Gentle strummers like "One Of These Days", "Unknown Legend" and the title track gain a warmth from the campfire setting that's missed in the more meticulously rendered studio versions.

The performances heard on the disc don’t necessarily capture the impatient vibe that he describes, but I certainly experienced it the night the tour hit LA’s Greek Theater in September, 1992. It was the rowdiest audience for a quiet acoustic concert I’ve ever seen, ready to scream their guts out when the lyric “I felt like getting high” came around, or sing along to “Roll Another Number”, noticeably less inclined to sit back and listen to much of anything. Reaction to the new songs was polite at first, but people were getting more fidgety as the night went on. After a while the catcalls started. Midway through a rambling, ten-minute. banjo-pickin’ monologue about his old blue tick hound Elvis during the song “Old King”, somebody in the front rows hollered out “Get to the point!”

“GET TO THE POINT?” Young transformed from Garrison Keillor into Henry Rollins before our very eyes. “Fuck you, man, I’m up here doing this song about my DOG, all right? What an asshole! Get to the point… AM I IN FUCKIN’ LA OR WHAT?”

Sadly, the set doesn’t include that moment, or any of the long, rambling versions of “Old King”, which on its good nights was Young’s comic masterpiece, complete with howls and sniffing noises. It also fails to include any of the other songs performed during the tour; although some have been released multiple times, the gorgeous 1975 outtake “Homefires” should get a proper release, as should his solo piano take on the haunting barrelhouse romp “Speakin’ Out.” But if what Neil’s decided to present, in the moment, is different from what his audience might have expected, even hoped for, it’s a compelling listen from start to finish, which is enough to justify the purchase price.