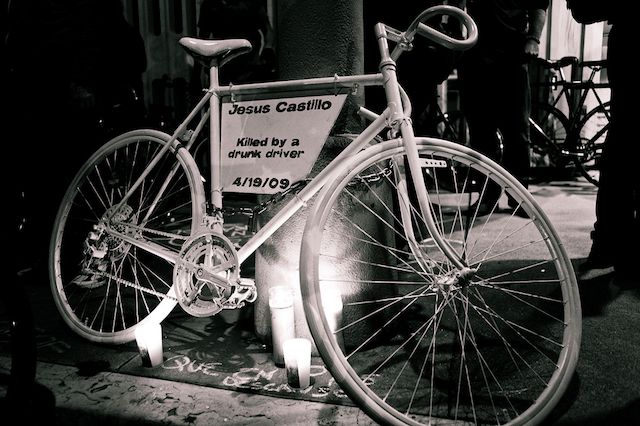 A ghost bike, like this one for man killed earlier this year, represents where bicyclists have fallen | Photo by alexbcthompson via LAist Featured Photos on Flickr

After being hit by a SUV while riding a bike earlier this month, a 52-year-old North Hollywood man died this weekend due to his injuries. Robert Painter was riding his bicycle through a crosswalk around 5:10 on December 2nd when a dark green or black Jeep Grand Cherokee hit him on Laurel Canyon Blvd. at Archwood Street.

Painter flew off his bike into the air and landed on the ground where he suffered severe injuries. The driver immediately fled the scene with a female passenger, according to witnesses. Painter was rushed to a nearby hospital where he was in labeled in critical condition. He passed away last Saturday.

Police have not been able to locate the suspects. The driver of the car is described as a male Hispanic 30 to 35 years old with dark hair and dark clothes. The female passenger was described as possibly wearing a red coat. The suspect’s car, which is said to have collision damage on the front end of the driver’s side, was last seen entering an Arco gas station at the intersection of Laurel Canyon Boulevard and Van Owen Street a block north of where the collision occurred.

Anyone with information about the incident is encouraged to contact Valley Traffic Division Detectives Doug Larkin at (818) 644-8036 or Detective William Bustos at (818) 644-8020. During off-hours, calls may be directed to a 24-hour, toll-free number at1-877-LAPD-24-7 (527-3247). Callers may also text “Crimes” with a cell phone or log on to www.lapdonline.org and click on Web tips. When using a cell phone, all messages should begin with “LAPD.” Tipsters may remain anonymous.