Tuesday is National Cupcake Day. So Who Has the Best? 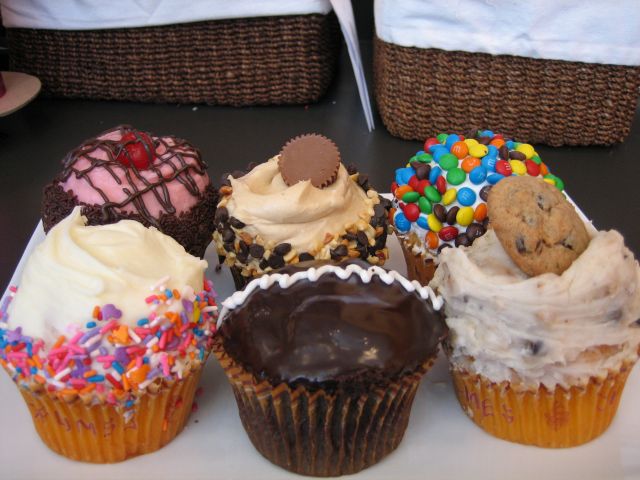 A selection of Crumbs cupcakes (Photo by Julie Wolfson/LAist)

Believe it or not, cupcakes remain a beloved food trend that seems to keep steadily growing as more cupcake-centric bakeries keep opening up around town. Whether you're on the cupcake bandwagon or not, at this time of year many of us make plenty of room for sweet treats as we gather with friends, family, and co-workers to celebrate the season. But it's not just Hanukkah or Christmas we're celebrating: Tuesday December 15th is National Cupcake Day*!

The way this holiday is observed is pretty straightforward: Eat a cupcake! But which cupcake to eat?

There are about a grillion cupcake bakeshops in Los Angeles, each with their own claim to fame from an iconic circle on top to the texture of their frosting to their signature flavors. And each bakery has bands of loyal customers (some of whom will line up just for a taste of their favorite treat.)

Yesterday LAist was part of a lucky group of cupcake eaters taken on a tour of 4 cupcake shops, Crumbs, Sprinkles, Susie Cakes and Vanilla Bakeshop and given the chance to sample a cupcake or two from each of the bakeries. Whisked around town in a mini-fleet of Chevy vehicles (including the bright yellow "bumblebee" Transformers Camaro) this "Best of Tour" was a sweet deal indeed.

Although we've tasted all these well-known cupcakeries' fare before, among the four we visited, for many the winner was Crumbs thanks to their fantastic variety of tempting and playful flavors (the Elvis, White Hot Chocolate, Black Forest, Oreo, Cookie Dough, and the Artie Lange to name a few), their cake batter's moist but crumbly texture, and their generous size.

And while they weren't on the tour, two other local bakeries' cupcakes definitely take the cake; Famous Cupcakes and Yummy Cupcakes are two of our favorites. Mind you, the granddaddy of the cupcake trend, NYC's Magnolia Bakery (where one Carrie Bradshaw nibbled on a cupcake and, so urban legend has it, launched the cupcake craze) is prepping to open here in Los Angeles... Could it be a cupcake game-changer?

All right, we asked for it... let the cupcake battle begin (here's a map that might help). If you could have one Los Angeles-made cupcake on National Cupcake Day, which would it be?

*Yes, we too have heard of this being celebrated on other days, too in both August and October.