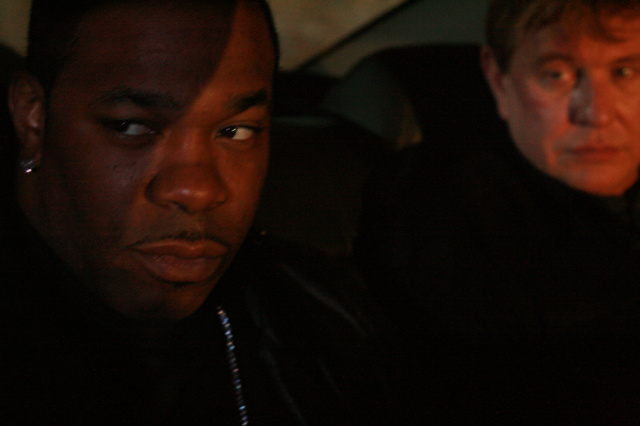 Busta Rhymes has been winning over audiences with his charismatic, energetic and animated personality since the early 1990s. In Breaking Point a film by Jeff Celentano which hits select theaters, including the Laemmle's Sunset 5, tonight you'll see a Busta unlike you've ever seen before. The former member of Leaders of the New School plays "Al Bowen" a vicious gang leader who, in the words of Busta "does some horrible shit." Some of that "horrible shit" includes throwing a baby out of a window.

The veteran of the rap game took some time to speak with LAist to discuss the film, playing a bad guy, working with boxing great Arturo Gatti, his next album and throwing a baby out a window.

1) What drew you to "Breaking Point"?
When I read the script, I just liked the nature of the story that's being told. I'm a fan of struggle, a fan of adversity. I love to know the tale behind someone's road to victory. How did someone become victorious at the end of whatever they were going through? At times, when you see someone standing as the knight in shining armor, we don't take the time to dissect it or to get to know what the process was for that man to reach that level of success. I'm a fan of that type of situation. So I really appreciated the shit that Tom Berenger's character went through in the movie.

Then when it got to the role I was being asked to play, I thought that it was ironic because I've never really been in seen in the light by people who've cast me for films. This is the first film I've done where I was playing the guy that everyone loved to hate. That was a challenge for me too because people primarily see me as the comic relief of the film -- just look at Shaft, Higher Learning and Finding Forrester. So for me, this film along with Narc, are really the only times I got to do some shit that wasn't necessarily the typecast for Busta Rhymes.

2) Do you enjoy playing the bad guy?
I actually enjoy anything that's outside of what is expected of me to do -- As long as it's within the realms of what I stand for, represent and live by morally and principally.

My character is bad. Very bad. He does some horrible shit. It was a little challenging for me actually doing because I didn't agree with the shit that this guy represented. I would hate to have to run into someone like that in real life. He's like the worst type of motherfucker I've ever seen. He's throwing a baby out the window? What the fuck is there left to be? That's like the most horrible shit in the world. After that I was fucked up. Having to do it over and over and having to hold a real baby, the whole process was fucking crazy to me. It was definitely challenging.

3) Was there a character you've seen in film or someone you've come across in your own life that you drew from for inspiration for this character?
As far as other performances go, I tried to really get inspired by the Denzel role in Training Day.

On a real life level, there's plenty of examples of this in the hood I came from in East Flatbush, Brooklyn in the mid to late 80s during the Reaganomics era. Times were different and the street life was a little more prominent in our lives in those years.

There were plenty of examples from that time period that I could draw from. There were some stories that were never told because it was a lot different culturally as opposed to what it is now. There wasn't anyone out there broadcasting the lifestyle of these individuals that you would see all the time because it was self-incriminating. A lot of the things I got to see, I never got to tell those stories because we were conditioned to never tell those stories. I had a lot of things that I could draw from back then that people would never see in me or even knew that I was exposed to because I never gave that off in my music. 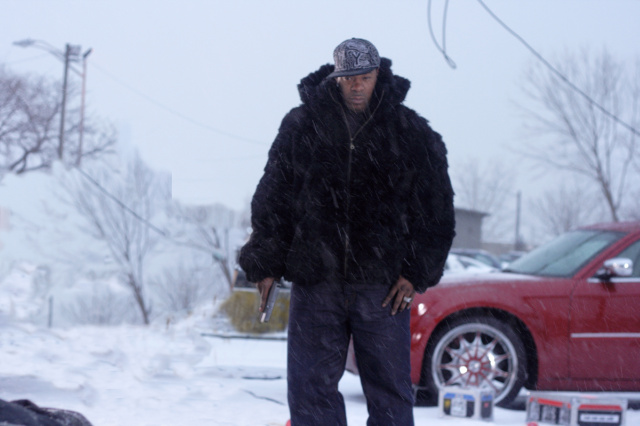 4) The late great boxer Arturo Gatti is in this film. What was it like working with him? How did the news of his death hit you?
I'm a boxing fanatic, so meeting Arturo Gatti was a privilege for me because I'm a fan. Having him as one of my soldiers in the film was some shit.

Hearing about anyone's death under any circumstance is always difficult. It's so final. It was definitely very ironic -- the last thing you'd ever expect to hear that that he died, nevermind the way he died. I still don't understand it. I don't know what really happened, how that happened and why that happened. I don't understand it. That was just one of the weirdest situations and one of the most unfortunate situations.

5) What are you hoping audiences take away from this film and your performance?
I definitely think that people should take away from the film the inspiration to get the endurance to overcome every and any level of adversity. That's the first thing. If you look at Tom Berenger's character, it don't really get much more rock bottom than that. He lives through all this shit and was able to survive it, clean his life up, clean his world up and evolve into something greater than he was before.

Secondly, I'd like people to see how diversified my ability is as an actor. Ultimately, we do this to show people that we can perform at levels that exceed our own expectations. I think I did a pretty good job. I want people to take away from it that Busta Rhymes takes the art of acting seriously.

6) A lot of actors have been critical of rappers who act for not taking it seriously. How do you feel about that criticism?
I feel the same way about the music game though. It's not even so much about somebody playing sports getting into music; and I have a problem with them getting into music just because they're an athlete trying to be a rapper. It's not even about that to me. I just feel that in anything that you do that you should take it seriously. One bad apple fucks it up for the whole bunch more so than the one that is thorough and creating opportunities for other people that really deserve and want a shot. It's fucked up that it goes like that.

As a recording artist, I would hate for what I do as an art to be compromised because of the handful of bullshit that might come through that people get exposed to and remember. People remember the negativity and the bullshit way more than they remember the credible and ingenious works that have contributed to the art.

Overall, what ever it is that you are going to get into, you should take it seriously.Whether it's film or music you should treat it like the art that it is.

7) Lastly,why did you decide to call your next album The Chemo? When can we expect to hear it?
The reason why I felt The Chemo is an appropriate title is because chemo is also something that could kill you too. It's a cure that can kill as well. I like the metaphor. I feel with my skills and abilities that I've got to a place where I can build but I can also destroy. With that being said, I would love to, through the music, be able to reestablish the value of the content.

That's going to take time though.

In the process of a chemotherapy treatment, you need several radiation treatments to kill the cancer. It doesn't just happen with one treatment. With this album, I hope that I can contribute whatever that treatment is whether it's the initial treatment that's needed to help reestablish the value of the content or it's one of the many because there's going to be several artists who are going to contribute a very substantial amount to making the game feel like it's supposed to again.

This is my ninth solo album. It just feels incredible the way it's coming together. I'm looking to drop it sometime around March or April of next year.