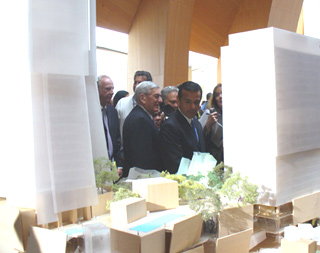 Eli Broad and Mayor Villaraigosa look at a model of the project in 2006 (Photo by cgkinla via the LAist Featured Photos pool on Flickr)
When the Grand Avenue Project got the green light in March 2008, the fact that its financing came from Dubai was a boon, not a burden, since the wealthy nation had been enjoying its time in the spotlight as a playground for abundance and construction. Now questions have arisen as to whether Dubai's current money troubles will affect the development. "The Board of Supervisors on Tuesday asked for a report on whether financial problems in Dubai will affect the $3 billion Grand Avenue project, whose developers have borrowed money from Dubai investors," according to the Daily News.

The concerns are focused on one of the companies doing the funding, which is "Istithmar Building FZE, an investment fund controlled by the royal family of Dubai. The fund has already provided $100 million for the project." It was, in fact, local economic worries that partly kept the Frank Gehry-designed Project from moving forward swiftly; the uncertainty of Downtown's real estate market primary among considerations.

The slowness of the local economy remains what's holding back this ambitious three-phase plan to revitalize Grand Avenue and build "entertainment venues, restaurants, a hotel and a $56 million park between City Hall and the Music Center," and not Dubai. According to Bill Witte, president of The Related Companies of California, the company building the Grand Avenue project: "We have no reason to believe their commitment has changed and frankly we have already spent all the money to get the project ready for construction. It's the market and timing that is holding us back."