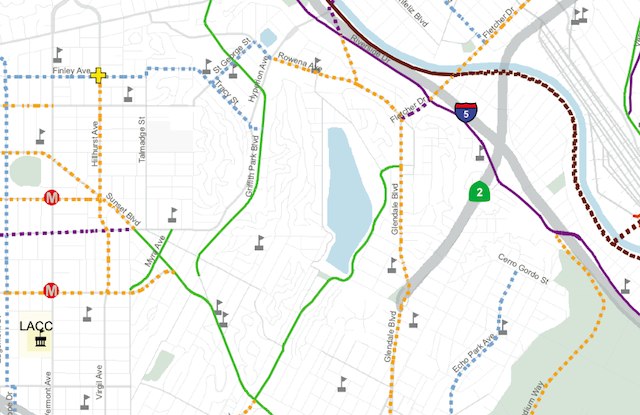 The ever-so engaged Silver Lake Neighborhood Council tomorrow will meet and consider a motion telling the city their recommendations on the controversial draft bicycle plan.

The draft plan says there is also potential for lanes along Silver Lake Boulevard until it ends at Beverly Boulevard, and then continuing towards the Vermont/Beverly Red Line station. Some neighborhood councilmembers agree, asking the full board recommend that the city follow through with the lane, changing it from a "potential" lane to a "proposed" one.

Other recommendations include designating West Silver Lake Drive as a bicycle friendly street: "The loop around the Silver Lake Reservoir is a popular destination
for recreational cyclists, runners and walkers," the motion reads.

Other bicycle friendly designations the motion seeks are:

The motion ends with this sentiment: "While outside of the SLNC boundaries, a bicycle infrastructure without continuous connectivity to Hollywood and Downtown Los Angeles is useless. Assign proposed designation to bike lanes east and west on Sunset Blvd from Downtown to Hollywood."