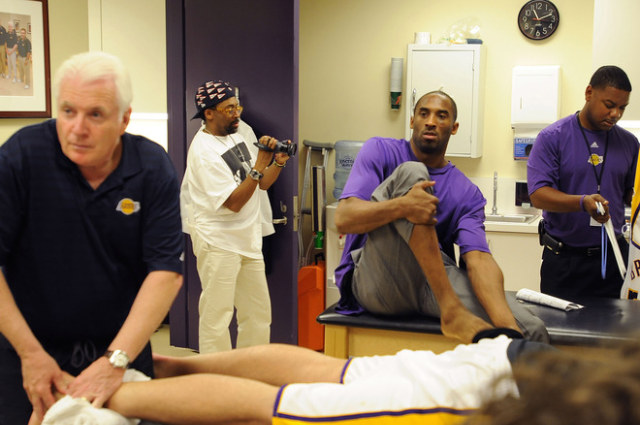 Spike Lee was given unlimited access to Kobe Bryant for Kobe Doin' Work, which is available now on DVD

There was a great deal of buzz when word first broke that acclaimed filmmaker Spike Lee would be making a documentary about Lakers' guard Kobe Bryant. On paper, a prominent director known for his love of the game of basketball giving audiences a rare look inside the life of one of the greatest players on the planet sounded like a slam dunk. Unfortunately, ESPN Films' Kobe Doin' Work was not that at all.

It is, however, very much worth watching and exactly what the title suggests — a chance to observe Kobe Bryant at work on a typical day at the office. The day Spike chose to film is April 13, 2008. On the schedule for that day, a pivotal late regular season game with the rival Spurs.

Kobe Doin' Work, which first aired on ESPN on May 16th commercial-free, offers a unique perspective of Bryant, head coach Phil Jackson and the Lakers on the court and in the locker room thanks to Spike's team of 30 cameras following number 24. While we're given an opportunity to experience a matchup of two of the NBA's elite teams from angles you won't get during a typical game broadcast, our access to the 2008 MVP, unfortunately, begins and ends at the Staples Center garage.

Because our look inside Kobe's life is limited to the four walls of the Lakers' home court, the film offers very little insight into who the shooting guard is off the court. The moments where we do get a glimpse of Bryant away from the hardwood -- like seeing him watch an interview with candidate Hillary Clinton on a TV in the trainer's room pre-game or post-game hugs with the wife and kids may be few and far between but are among the film's highlights.

These moments are rare because the director was not shooting for a portrait of Bryant away from basketball.

Lee told ESPN.com that he got the idea for Kobe Doin' Work after watching Zidane, A 21st Century Portrait, a documentary about French soccer player Zinedine Zidane. In Zidane, filmmakers Douglas Gordon and Philippe Parreno present a Real Madrid vs. Villarreal CF game on April 23, 2005 purely from the perspective of Zidane shot with 17 cameras.

Armed with 13 more cameras, a mic'd up Kobe and much less ground to cover than Gordon and Parreno, the filmmaker captures the star doing what he does best from multiple vantage points including from the view from Spike's courtside seat. To compliment the rare footage, Kobe provides a voiceover track which he recorded just hours after dropping 61 points on Spike's beloved New York Knicks on February 2, 2009. 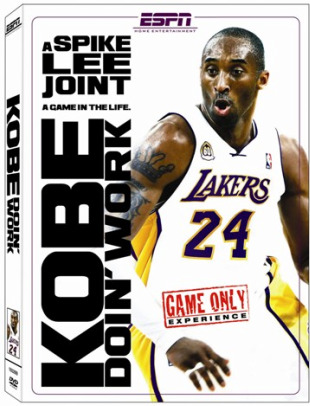 Kobe's commentary shifts between very detailed, almost too detailed and quite boring, X's and O's of the game to entertaining anecdotes about members of the Spurs and his own teammates. Thanks to the voiceover, we learn why Kobe wipes his hands on his jersey countless times per game, the simplicity of the "Triangle Offense" and the multiple languages the protagonist speaks on the floor.

The very best moment of Kobe Doin' Work comes when the game reaches half time. The cameras keep rolling inside the locker room as Phil, Kobe and team sit back and watch clips from the broadcast of the game while coach and player, mostly player, dissect the game. In the voiceover Kobe tells us that their love for the attention to details of the game is the reason he and Phil get along so well. If you too love the details of the game of basketball, you'll love watching these two doin' work.

In Zidane, the star player's game ends early after being sent off as the result of a brawl. In Kobe Doin' Work our star's game ends early as well but not because of a fight, the Lakers blew out San Antonio allowing Kobe to get some rest. The fourth quarter breaks away from the format and turns into an enjoyable Q&A session between Spike and Kobe.

The DVD offers two versions of the film, allowing you to watch the uncensored film featuring the four-letter words "The Worldwide Leader" couldn't air. Aside from this "dirty version," the DVD's extra features are weak. If you saw Kobe Doin' Work back in May, there isn't much difference here from the original broadcast except for maybe a few instances of Kobe saying "shit" or "motherfucker" and deleted scenes from the fourth quarter of this one-sided ball game. If you missed this Spike Lee joint the first time around, you might want to throw it in your Netflix queue. It's worth at least one viewing, especially if you're a Kobe fan.