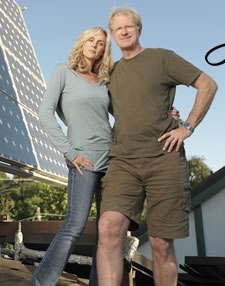 Rachelle Carson and Ed Begley Jr. live the green life in "Living With Ed" which airs on Discovery's Planet Green on Wednesday nights at 6:00pm
Ed Begley Jr. has performed in the most incredible array of stage, film, and television productions over the last 40 years, getting his small screen start in such staples as "My Three Sons" and "Adam-12" to being a face you saw everywhere during the Heyday of Television in "Laverne & Shirley", "Quincy M.E.", "Mannix", and his primary role as Dr. Victor Ehrlich in "St. Elsewhere". Also well known for his work in Christopher Guest's films, Begley has been a massive presence in some of the best contemporary TV out there: "Six Feet Under", "Arrested Development", "Boston Legal", and "Veronica Mars".

From the beginning of his professional career in the late 1960s, Begley has been an advocate and activist for the environment, living an energy conscious life, learning as much as he can about technologies and practices to personally reduce one's impact on the planet and spreading that information to as many people as he can. Leveraging the medium he is best known for, Begley is bringing his daily experiences with energy efficiency and smart-living to all of us by helming "Living With Ed", his program on Discovery's Planet Green network (use their channel finder to get hooked up). There is a new episode of "Living With Ed" tonight at 6pm and several times tomorrow (Thanksgiving!), Planet Green will be running this season's episodes back-to-back.

We were thrilled to talk with Ed Begley Jr., one of our favorite TV icons, last week by phone (for the entire interview, listen to the file at the end of the post):

LAist: Could you give us a few pointers, your top 3 suggestions for what people in Southern California could do today or this weekend that would help out the environment or use less energy?

Ed Begley Jr.: Number 1 would be lighting. Get rid of your old little mini-toasters, otherwise known as incandescent bulbs, and replace them with energy-efficient bulbs. That's Number 1, and that's something that's pretty inexpensive to do these days, go to Cosco or Home Depot and get the energy efficient bulbs and they don't break the bank and you get the savings on that right away.

Number 2 would be to put some weather stripping up around your doors and windows. You get it at Home Depot or a place like that. It has an adhesive backing so you don't need to tack it up anymore like you had to do, you remove the back layer and put it up where you need it and you start saving energy and money right away.

Number 3, get an energy-saving thermostat. Get one of those up, and most importantly, program it. As we go into the cooler months, there's so much energy savings [available]. Who wants to sleep in a hot house at night? I don't! It gets cooler at night now, which is very pleasant for sleeping, and then in the morning it's nice and warm at that hour when I get up because I've programmed the thermostat to do so. With the "Leave/Return" mode [on the thermostat] I make sure that the house isn't unduly warm in the winter and unduly cool in the summer because it's programmed to my schedule. By programming it I save so much more energy and money.

LAist: Whenever I'm flying into LA, flying over this area with so much abundant year-round sunshine, I'm appalled at the lack of tried-and-true technology like solar hot water.

Ed Begley Jr.: I agree, it is crazy that more homes haven't done that very efficient way of saving energy and money. If you do that, you get the system paid back in 4 years, solar hot water takes half the time than solar-electric pays you back. Fortunately there's some very forward thinking utilities out there like Valley Electric in Nevada, they are giving people solar hot water for $50 a household! Right away, they get that $50 back in that first billing cycle. How do they heat water normally in Pahrump, Nevada? With electric water heaters because there are no natural gas lines going out to Pahrump, Nevada. The utilities are faced with having to build more power plants for these big screen TVs, blow dryers, and cell phone chargers. It they can avoid building another power plant by giving people solar hot water, everyone wins. I agree it's appalling, that's the word I would use, why aren't there more households with solar hot water?

Keep in mind, if you do the cheap and easy stuff that I mentioned: the lighting, the weather-stripping, the energy-saving thermostat then you can go very quickly to grid insulation in your attic, maybe a solar oven, maybe a rain barrel to collect rain water and save money on your water bill, your electric bill, your natural gas bill, you're going to have money to put into a solar hot water system pretty quick. I would suggest people do that, pick the low-hanging fruit first, the cheap and easy stuff, that you can afford and I would say in just a few years a medium-income family could afford a solar hot water system. The system will pay back in just four years and then save a lot more money over the lifetime of the unit, which is at least twenty years with little to no maintenance.

LAist: For those of us who have a big guilt complex about flying, what can we do to allay our guilt in that area?

Ed Begley, Jr.: I try to avoid it, it's my last choice on my transportation list. If I have to be somewhere and I have to use a plane, when I buy my ticket I buy a TerraPass, which is a carbon-offset program that puts new clean green electrons in the energy grid and you really are offsetting the CO2 from that plane rid with electrons in solar/wind/geothermal. The more people that do it, the more renewables we will have - it's a real pound-for-pound transaction for the CO2. You aren't eliminating the emissions from the jet, that's true, but when you buy the TerraPass you are totally offsetting the pollution from a power plant somewhere.

LAist: Do you think that we are, as a species, running into a wall where we are realizing that we can't do certain things anymore?

Ed Begley Jr.: I think some people are waking up to that, I think some people are seeing the long term cost as well as the short term effects and they're taking action. I travel around the country and I see Red State people and Blue State people who want to do something to clean up the air in our cities, lessen our dependence on Middle East oil and put money in their pockets. If you don't believe in climate change, let's put that aside for now, what do we agree on? Do we agree that there's air pollution in Bakersfield or Houston or where you live? Do we agree that we have too much dependence on mid-east oil? Do we all agree that we'd like to save some dough? Well let's do those three things and let's do them right and we'll also mitigate climate change.

Ed Begley Jr.: Some of it isn't easy or cheap, but I didn't do any of that difficult or expensive stuff early on in 1970 myself. I don't expect anyone to do that right away - in 1970 I was broke so I did the cheap and easy stuff I could do: the composting, the recycling, the bike riding and public transportation, turning the thermostat down in the winter and higher in the summer, doing all the things that saved me money right away. There are things that are hard and expensive so wait on those but do what you can today.

I think there are some people who are stalled and think that since they can't afford solar panels, "so what am I doing to do?" Well there's plenty of stuff that you can do that don't involve solar panels. Perhaps you can do as I did after 15 years of the cheap and easy stuff I could do solar hot water, and then 20 years after I started this in 1970 I could afford solar electric. There's a progression, pick the low hanging fruit first, the cheap and easy stuff, and then build and build and reinvest that money.

You will see right away in the first billing cycle or two the savings from the cheap and easy stuff and then invest in the medium ticket items and finally with the bigger ticket items like solar hot water. You are just going to keep saving dough, pretty soon your bills will be so low that you'll have extra money every month of your life for the rest of your life.

------
You can learn more about Ed Begley Jr. at his website, check out the "Living With Ed" website for information about the show, products, practices, and his Guide To Sustainable Living, a comprehensive resource (352 pages!) for planning how to be environmentally efficient and save money at the same time.

You can see Ed: in tonight's new episode of "Living With Ed" on Planet Green at 6pm; in tomorrow's "Living With Ed" Thanksgiving marathon; and in the upcoming series finale of "Monk", part I is this Friday at 9pm on USA.

To listen to the complete interview, use the player below: