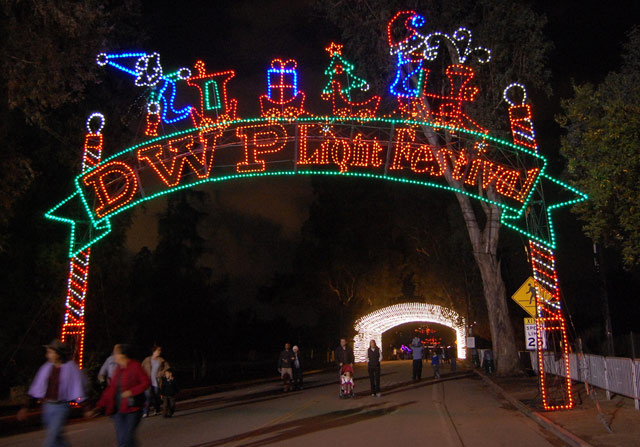 In its 14th year, the LA DWP's annual Holiday Light Festival will take place inside Griffith Park from December 3-30th. The event is starting later this year, however, so that "you can linger over your Thanksgiving turkey," the DWP explains in a press release. No matter when you make it down, however, you can take a look at the one-mile stretch of Zoo Drive bedecked with over one million energy-efficient LED lights set up in their usual displays aimed at "showcasing the uniqueness of the City of Los Angeles" (for the uninitiated, read: shaped like city landmarks).

To get things underway, the display's first night on December 3rd will be a "Bike Night," with the nights of December 4-17th "walking-only" vehicle-free nights. Two other Monday nights, December 21 and 28, will have half-hour car-free blocks of time, too, from 5:00p.m. to 5:30 p.m. If you're taking it in on foot or by bicycle, parking is available at the LA Zoo, and can be accessed through Zoo Drive. From the 18th-30th cars will be permitted through the display. The Holiday Light Fest is open from 5-10 p.m. on all the nights of the event.

The push to have more time dedicated to the Festival being "vehicle free" most likely stems from the controversy aroused last year when City Councilmember Tom LaBonge proclaimed that the limitations on cyclists traveling the route alongside cars can be attributed to the road not being public. During a heated planning meeting last year "Tom [LaBonge] and the DWP simply explained that it is too difficult to simply make changes, that these things take time and that change comes in little increments." Perhaps the two vehicle-free weeks of this year's Festival are those increments, indeed.