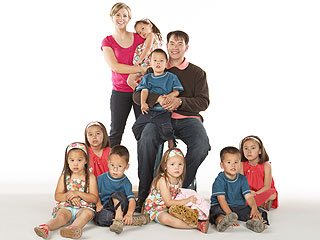 "Jon & Kate Plus 8" series finale tonight on TLC at 9pm
Some would say "it's finally over" about tonight's series finale of "Jon & Kate Plus 8" on TLC at 9pm, but does anyone really think it's over? Jon Gosselin is suing TLC, TLC is suing Jon Gosselin, and TLC is organizing at least another show for Kate, America's favorite octomom. What isn't funny is how badly this all must be screwing up the kids.
—-
A lot of people dumped on Larry David's "Curb Your Enthusiasm" when it was announced that that there would be a "Seinfeld" reunion storyline. Again, we're talking about Larry David and again he delivered a great season, probably the best "Curb Your Enthusiasm" season in the last 3 years. The show never overplayed the "Seinfeld" aspect - it was nothing more than a device to put people in the painfully awkward and embarrassing situations that are pure comedic genius. Thanks Mr. David, please come back again next year - HBO, make it happen.
—-
Production of "Cougar Town" has been put on hiatus as Courtney Cox has to deal with "a private family matter". Fans shouldn't worry though as the show has been picked up for a full season and will definitely be back.
—-
Tonight we'll see David Frost get honored the International Emmys - hopefully we'll have some video for you tomorrow.
—-
The TV Junkie Plan: "How I Met Your Mother", "Jon & Kate Plus 8", Leno (The Governator + Gaga), Kimmel.

8:00pm House FOX - On the eve of Thanksgiving, the team treats an exceptionally brilliant physicist who traded his career for a job as a courier

9:00pm Jon & Kate Plus 8 TLC - Series Finale. Jon and Kate address the ups and downs of the last few years and recent events in their lives

9:30pm The Big Bang Theory CBS - After being humiliated on the radio, Sheldon vows to destroy Kripke