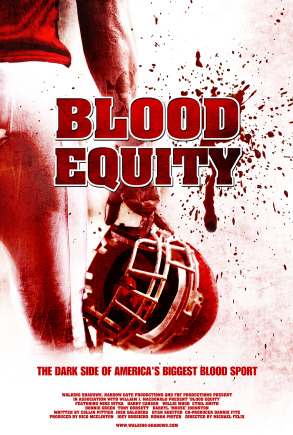 This weekend, all you have to do to watch bone-crushing, high impact violence is turn on either CBS or Fox's coverage of the NFL. Also this weekend, you can head over to the Laemmle Sunset 5, in West Hollywood to get some perspective on the aftermath of those helmet-to-helmet collisions.

Blood Equity features gripping testimonials from NFL legends like Mike Ditka, Harry Carson, Tony Dorsett, Darryl "Moose" Johnston and Willie Wood about the hardships and struggles of life after football. After years of winning championships and living like a hero for their abilities on the field, many players find themselves living in a world of pain, and the league that they gave their life to doesn't seem to even know or care about them.

One former NFL player who was completely unaware of the struggles of his peers was 15 year NFL veteran & 3 time Super Bowl Champion Roman Phifer. Following his retirement from the NFL in 2005, the former LA/St. Louis Ram, New England Patriot and New York Giant began working in real estate. While in Florida for a real estate convention, Phifer had the chance to attend a meeting of former pro football players thinking this would be an opportunity to hang out with some old friends. This meeting would end up serving as an eye opener.

"He (Phifer) gets to this meeting and realizes that the topic of discussion is this issue between former players and the NFLPA. He found out that the NFLPA isn't taking care of these guys," says Rico McClinton a friend/business partner of Phifer who serves as producer of Blood Equity, along with Joe Ruggiero and Phifer. "He hadn't heard any of this during the whole time he was playing. This sort of thing isn't talked about in the locker rooms, players don't talk about, coaches don't talk about it, nobody talks about it."

McClinton, a former personal trainer to the NFL stars who is now an actor and filmmaker, is hoping that this film will have the same sort of impact that that meeting in Florida had for Phifer. "We want let people know about this, it's an important issue that a lot of people feel very passionately about and we feel like something needs to be done." McClinton adds, "There's tons of money being made right now off of these guy's backs, they helped build this league, and they're being left high and dry."

The film features interviews with a wide range of perspectives. Ditka, a former Chicago Bears player and head coach holds nothing back while expressing his anger for the treatment, or lack there of, of his peers while sitting at the bar of his steakhouse while smoking a cigar. And then there's Baltimore Colts legend John Mackey. The five-time Pro Bowl tight end is shown in his assisted living home. The majority of the interview is done by his wife speaking on Mackey's behalf. The hardest hitting moment of the film comes when Mackey is shown having trouble recognizing family photos.

Ditka, who has lived a successful and lucrative life after football, doesn't need to be as vocal as he's been on the issue. He's still very much involved with the game and can be seen every Sunday on ESPN's "NFL Countdown" but is not at all afraid to rip the NFLPA. "He's like the Godfather of football, and you definitely get that from him when he lights up that cigar. These guys are like brothers, and he's just trying to speak on their behalf," says McClinton.

The film is full of examples of players reaching out to their peers and offering them help and support. "It really is like a fraternity with these guys," explains McClinton. At the center of the fraternity of player's anger is former NFLPA Executive Director, the late Gene Upshaw. The film was shot prior to Upshaw's passing, which is addressed at the end of the film with an update.

McClinton explains, "We didn't make this film to bash Gene Upshaw. It was more about the position he held. If you look today, under new leadership, nothing's changed."

One thing you won't find in this film, however, is footage from NFL games. McClinton explains, "The footage that NFL Films was going to let us use for the film wasn't what we were looking for. We were looking for the big hits you're used to seeing on Sundays, instead we were given shoe string tackles." To fill in for the lack of NFL footage, the filmmakers used hits from the college game. "You'll see even the college kids are taking big hits."

While the NFL and NFLPA may be at the center of this issue, McClinton would like us to know that he and his friend and business partner Phifer, still love this game. "Roman wouldn't be coaching right now if he didn't love the game. I still sit down and watch a game every Sunday. We both love the football and the NFL." He adds, "This is just one issue where we'd like to see some change from the league."