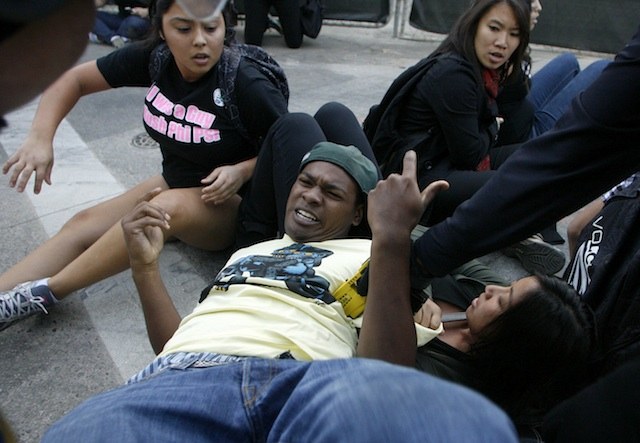 Student Rustin O'Neil, center, is stunned with a taser gun as Vianney Vargas, left, looks on they and others sit on a road on the UCLA campus where vans holding attendees where driving leading away from the Covel Commons | (AP Photo/Danny Moloshok)

UCLA is no stranger to Taser Gun use. After a horrible video in 2006 surfaced of a student, who was already retrained by officers, being tasered several times, the school suffered a good amount of drama and settled with the student for $220,000.

During protests over the past two days, at least a few students were tasered. UCLA officials said two were tasered on Wednesday and photos show that at least one student was on Thursday.

A witness to Thursday's incident tells LAist that two people were tasered during a scuffle captured in photos. "In fact with this particular incident," said the student, "there were actually two students who were tasered, the girl lying down next to Rustin O'Neill on the right in the first photo posted was also tasered, once, in the arm, and Rustin was tasered multiple times over the heart."

UCPD officials were not immediately available for comment. An updated press release from UCLA did not mention the use of tasers on Thursday.

A memo and training bulletin from Taser that gained media attention last month warned agencies that "if a stun gun is discharged to the chest, a lawsuit likely will follow, charging that police used excessive force," according to CNN in an aricle called "Taser makers say don't aim at chest."