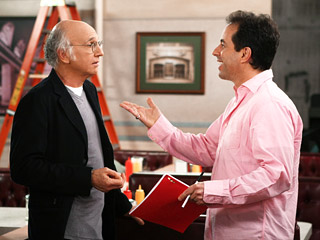 We're very much looking forward to Sunday's "Curb Your Enthusiasm" season finale. The "Seinfeld" reunion has been played perfectly - not overemphasized and very realistically positioned for the best comedic effect. A comedian on the circuit told me that "Curb" wasn't funny, and he's right that it's not funny in a stand-up comedy kind of way but it's sure as hell funny through the use of exploiting the most embarrassing and awkward situations you could ever put human beings into. It brings truth to the statement that comedy can be gleaned from observing someone else's tragedy. The close of this excellent seventh season is on Sunday at 9pm on HBO.
—-
Ok ok, so Oprah is ending her show in 2011. Can we move that date up?
—-
Bon Jovi performs on Conan tonight - we covered Jon Bon Jovi's acoustic performance at Lincoln Center earlier this week, check out the 45 minute of music in the video at the end of this post.
—-
If you've still got questions about Swine Flu/H1N1/Seasonal Flu/etc., consider signing on to an WebMD chat hosted by The Weather Channel this Monday from 3am-8am Pacific - just go to The Weather Channel website at that time and follow instructions.

9:00pm Monk USA - Monk's return to the police force becomes more challenging than he anticipated when he becomes involved in investigating a serial killer.

10:00pm NUMB3RS CBS - When robbers strike a diamond exchange and take hostages, the team thinks the culprits are copying a convict's criminal strategies.

10:00pm White Collar USA - After an expensive portrait is stolen from a young woman, Neal tries to uncover the secret behind its origin

10:00pm Sanctuary Syfy - Dr. Magnus is charged with murder, Will must go up against the heads of the Sanctuary Network to defend her.

10:00pm Crash Starz - During a blackout in LA Jocko Sims returns to help Dennis Hopper track down the drug dealer who may have murdered his daughter

9:00pm Robin Hood BBC America - Robin tells the Outlaws Gisborne is joining them so he can honor his father's dying wish and save his half-brother.

8:00pm The Amazing Race 15 CBS - Tempers flare when a team breaks a promise; a stolen taxi leads to a team falling to last place.

10:00pm Storm Chasers Discovery - Reed pushes too close to a tornado and finds no place to hide.

"An Evening With Jon Bon Jovi and Friends" was a performance offered only to American Express card holders. Proceeds from the $50 ticket went to charity and after the performance (which included audience Q&A) everyone was presented with a gift bag containing Bon Jovi's new album, a DVD of a documentary on the band called "When We Were Beautiful", and a hardcover book to accompany the film. Perhaps you aren't a Bon Jovi fan, but you should be aware of this series that American Express is involved with producing as an artist you are interested in might be their next featured performer. Word was spread on Twitter via the @AmericanExpress account and sold out in hours. For you Bon Jovi fans, you'll have to enjoy the band on Conan tonight and/or be one of the 50,000+ at the next concert instead of being one in a few hundred like this last Monday.