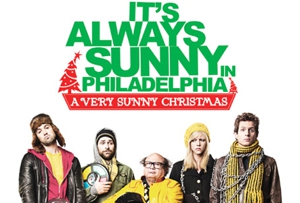 "It's Always Sunny In Philadelphia: A Very Sunny Christmas" is out on DVD and Bu-ray this week
We've reached Thursday which means it's comedy night topped by "It's Always Sunny In Philadelphia" on FX at 10pm providing some insight into how Dennis manages to score with so many women. We also had a chance to see the "It's Always Sunny In Philadelphia" Holiday special, "A Very Sunny Christmas": a 43 minute featurette that's been getting a lot of promo on FX the last couple weeks. If you're a fan, you have to get a hold of it, no question there, it's on DVD & Blu-ray at Amazon. What do you get: Danny DeVito nude and greased up; a supporting role from veteran actor David Huddleston; brilliant casting of "young" Mac, Charlie, Dennis, and Dee (they appear to have used cloning!); classic animation in the style of Rankin/Bass; a disturbing and surreal Christmas sing-a-long with the gang from Paddy's.

8:00pm Community NBC - The gang nominates Jeff to talk some sense into Chang when he assigns an absurd amount of homework

8:00pm Survivor: Samoa CBS - A clever castaway jeopardizes the success of a scheme to ensure safety in the game

8:30pm Parks and Recreation NBC - Leslie invites herself on Ron's annual hunting trip to prove that she can hang with the guys

9:00pm Fringe FOX - A peculiar abduction in Boston leads the Fringe team to uncover details of the mysterious man known as The Observer

9:30pm 30 Rock NBC - Liz must make a drastic change to her living arrangements when her apartment building is converted to condos

10:00pm It's Always Sunny in Philadelphia FX - Dennis reveals his full proof system for seducing any woman to the rest of the gang, but they don't grasp the concept.

10:00pm The Mentalist CBS - Faced with a violent crime in its own office, the CBI team must work the case despite the alarm of who may be behind it

10:30pm The League FX - Kevin enlists Taco to scare Ellie off her toy; the guys join Pete on what was supposed to be his 5th anniversary spa trip.

12:00am Free Radio Comedy Central - Lance is slow to accept the truth about his superfan; James is jealous of Anna's new Internet boyfriend; "It's Always Sunny in Philadelphia" cast guests.