TV Junkie: 'The Prisoner' vs 'V' vs Fellini; 'Pacific' Progressing 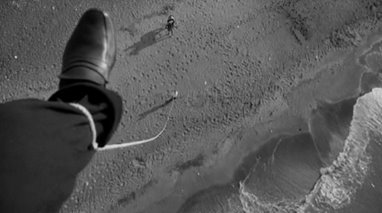 Fellini's "8 1/2" on TCM is competing for your eyeballs at 8pm along with lots of other good stuff tonight
Tonight's another tough night for picking what to watch: we're going to stick with "The Prisoner" to the end (what do you guys think of this show?), then it's on to "Sons of Anarchy" (since it's already 10pm by that time) but late night is a treat with Vice President Joe Biden on "The Daily Show" followed by nerdist author Malcolm Gladwell and then Ferguson hosts a guest appearance by Woody Harrelson who will be discussing his film The Messenger which we featured here. The competition is still all over ("V", Fellini!, a really good "Frontline", and tons of late night).
—-
HBO has come up with a new trailer for its miniseries "Pacific" which will air in March. Looks like post-production is going well by the look of it (see the clip at the end of this post).
—-
A&E has picked our perennial favorite comedian, Bob Saget, to helm "Bob Saget's Strange Days", an unscripted exploration of American subcultures. The show will air in May of 2010 - congrats Bob!
—-
Congrats also go to the comedy genius that is Chris Elliott who is set to star in the Cartoon Network's Adult Swim offering, "Eagleheart".
—-
Dear ladies of Los Angeles: if you're 35+ and are considered "hot stuff", prove it by auditioning for TV Land's "She's Got The Look" on December 6th. Check out the details and let us know if you made the cut.

---
RIP Ken Ober, you helped create the best show MTV ever had.
---
The TV Junkie: "The Prisoner", "Sons of Anarchy", "The Daily Show", "The Colbert Report", Ferguson.

8:00pm So You Think You Can Dance FOX - The 14 remaining dancers perform. Anything for you Julie.

8:00pm Being Neil Armstrong BBC America - Author Andrew Smith travels across the country talking to the people who know the astronaut best.

9:00pm Frontline: A Death in Tehran PBS/KCET - Neda Soltani was shot and killed on the streets of Tehran, Iran, during protests over the country's presidential election.

9:00pm NCIS: Los Angeles CBS - While Hetty is at a Senate hearing in Washington, D.C., a murder investigation leads the team to stolen missiles

9:00pm Melrose Place The CW - Ella is stunned when WPK owner Amanda Woodward fires half the staff, including Caleb

10:00pm Sons of Anarchy FX - Chibs makes a secret deal with Agent Stahl in order to protect his wife and daughter

10:30pm Ideal IFC - Judith gets a party mask glued to her face