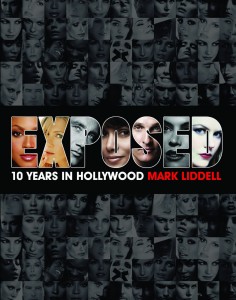 "Exposed: 10 Years in Hollywood" by Mark Liddell
Mark Liddell is the photographer of choice when an actor or celebrity needs to create an iconic image of themselves. From supermodels like Naomi Campbell to rockers like Avril Lavigne to socialites like Paris Hilton, among their most compelling photos were shot by Liddell. Many photographs of these celebrities were done in the name of advancing charity work and now Liddell has released his first book of photographs, Exposed: 10 Years in Hollywood, to benefit The Trevor Project (suicide prevention for teens), which he chose in memory of his best friend’s suicide, and The Jenesse Center for the prevention of domestic violence. The book is available at Channel Photographics and can be pre-ordered at Amazon.

We had the chance to talk to Mark Liddell by phone just after the book launch in Hollywood, hosted by frequent subject Jessica Alba last week, and we shot footage of his New York launch party last night (see video at end of post), which was hosted by Halle Berry. Go to the end of the post for the audio of the interview as well as the video of the party.

LAist: You had your book launch for Exposed: 10 Years In Hollywood last week in LA. We heard you also showed a film at the launch, what was that about?

Mark Liddell: The film is basically the book coming to life, helping the causes that the book is [raising money for]: domestic abuse and suicide prevention. It's a very gut-wrenching film. It's a short film of about seven minutes.

LAist: Can we ask how you got started?

Mark Liddell: I used to be a fashion photographer in Europe. I used to do campaigns with Gianni Versace, I actually shot the last campaign before he was murdered, the one with Naomi Campbell. I used to shoot campaigns with Fendi, a lot of work with supermodels back then. And then the Princess of Wales was unfortunately killed in a car accident and I was asked to do a series of pictures of some of the most beautiful women in the world to help start off the memorial fund. I used to go down to Kensington Palace and work on a list of people she admired and this was the first time I shot celebrities so Janet Jackson was the first celebrity I ever shot and it's been great, that was twelve years ago and I've been in LA for ten years now. That led to me shooting celebrities and working with Nicole Kidman who told me to come to LA, "come on, we need a corps photographer!"

LAist: Other than professionally how are you enjoying your time in LA?

Mark Liddell: I actually love LA, and I came here hating it and loathing it and screaming and shouting but I believe that life opportunities happen and you have to go with them and I now wouldn';t live anywhere else. I've lived in Australia, in Jamaica, the UK, and Italy, and I've been a gypsy all my life and finally I settled in LA and I'm loving it.

LAist: Can you tell us a couple of your favorite spots, places that you frequent?

Mark Liddell: I'm in Runyon Canyon every day, hiking, which I really love and I live up in Nichols Canyon .

LAist: What was your process for selecting who you would include in the book?

Mark Liddell: That was a difficult one, I'e been really lucky that in the last ten years I've shot many celebrities and we've found a way to put half of them in this book and then next year we're going to be coming out with a Part Two as well so I didn't want to use everyone in this book. It was a difficult decision to figure out who would go in which book and which went better with the two causes we're supporting.

LAist: A lot of people have pre-formed opinions about celebrities and actors, could you relate an experience where your expectations were totally flipped on their head?

Mark Liddell: I was very nervous about shooting Sharon Stone because I had heard about how powerful she was and how strong she was and I was so impressed upon working with her, it was an incredible experience. It was for AmfAR which made it even better because for me when shooting for a cause or charity is involved the pictures can have a voice and a meaning behind them. Often a celebrity will come by for an hour or two for a shoot and she but she said she would stay as long as it takes for these pictures to turn out incredible. She said "I will do whatever you need me to do, put on wigs, I will change as many times as you want, we need to give everything to make these pictures incredible to get people to donate as much money as possible." I was just blown away by Sharon Stone, it was a really great surprise.

LAist: Tell us what you do to elicit the moods from your subjects that are communicated in your photographs?

Mark Liddell: Yeah, I should have a degree in being a therapist [laughter], yeah, it's a therapy session to shoot with Mark Liddell. I really believe you have to be as normal as possible, I don't treat a celebrity like a celebrity, I treat them as a friend, as a normal person that I have a joke or a laugh with. I'm vulnerable with them, I share stories with them about me, in order to get them to open up to me. I know it's a trust issue, and they know I will never reveal what they tell me and hopefully what I tell them enhances the bond between the two of us. Once I get past the "Star" issue, because sometimes I do get a little in awe, and it takesfive mintues. I know when I first met Annie Lenox I was a quivering mess, she's such an icon, but when you first sit down with someone everyone is normal, everyone has a story, I respect the humanity in people, and everyone is as important as everyone else, that's just my philosophy on life and how I work with people.

LAist: Do you have some words of advice for people who would like to get started on the path to what you are doing?

Mark Liddell: I got turned down by every photography college in the UK. Nobody wanted me and told me I wasn't good enough to be a photographer but I knew I had an eye and I knew I had a heart that went with that eye and I just believed in myself. You just have to work at it and believe in yourself, it's not about stardom, it's not about fame, it's not about money, it's about belief in what you do and who you are. I believe that the best experience is going out in the world and doing it yourself.

---
You can get more information on the book and Mark Liddell at his website.

The NYC launch of "Exposed: 10 Years in Hollywood":

At the Crosby Hotel in SoHo. In the vid are Mark Liddell, Halle Berry, stylist Bobbie Thomas, and actress Kelly Rutherford from "Gossip Girl" and the original "Melrose Place".