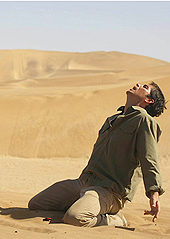 James Caviezel is right: OMG when am I going to find another 2 hours to watch "The Prisoner" tonight!
Weekend Notes: January Jones was host of "Saturday Night Live" and if Taylor Swift "nailed" her hosting duties a week ago then Jones did at least as good of a job. The key difference was the writing and the writing was definitely better for the November 7th show. Could it have been a better show? Yes, but not from anything January Jones could have done. It was so painfully obvious that the show had no idea what to do with her - most of her sketches were variations on her "Mad Men" role and most weren't very good. After an hour and a half, we still don't know if Jones is a good comedic actress, c'mon "SNL".

Sunday marked the premiere of AMC's remake of "The Prisoner" and it was really difficult to not want to see Patrick McGoohan purposefully stalking his way through the sets. We're not sure we are fans, yet, of James Caviezel's Number 6, updated to be wavering and unsure of his true self, something we never would have seen McGoohan do, but perhaps more "realistic". Who needs realism goddammit?! A big question we have is why is AMC plowing through the series at 2 episodes per night? Carving out 2 hours during such prime viewing hours with so much competition is tough and we have to somehow do it tonight as well.
—-
NBC is developing a comedy from sitcom veteran Larry Charles of "Curb Your Enthusiasm" and Borat fame to be developed under.... (gasp) McG's production company Wonderland Sound & Vision. Charles will write, exec produce and direct the project if and whenever it launches.
—-
The TV Junkie Plan: "The Prisoner", "Cake Boss", Letterman, Ferguson.

8:00pm The Prisoner AMC - Six becomes a spy for Two; 313 is fearful of her gift; 11-12's secret is exposed; Six meets a familiar woman; The Village is struck by a natural disaster; 147 endures a family tragedy.

8:00pm How I Met Your Mother CBS - After breaking up with Robin, Barney pulls out all of his greatest tricks to get back into the dating scene.

8:00pm House FX - House reclaims his role as head of diagnostics in time to treat an adult film star admitted to the hospital for pulsating eye pain

8:00pm Heroes NBC - Samuel discovers how powerful he can become; Tracy starts to lose control of her ability

9:30pm The Big Bang Theory CBS - Penny is forced to rely on Sheldon when she is injured while Howard, Leonard and Raj are away.

10:00pm Cake Boss TLC - After Buddy is asked to make a cage-fighting cake his teenage nephew is inspired to challenge Frankie to a wrestling match.