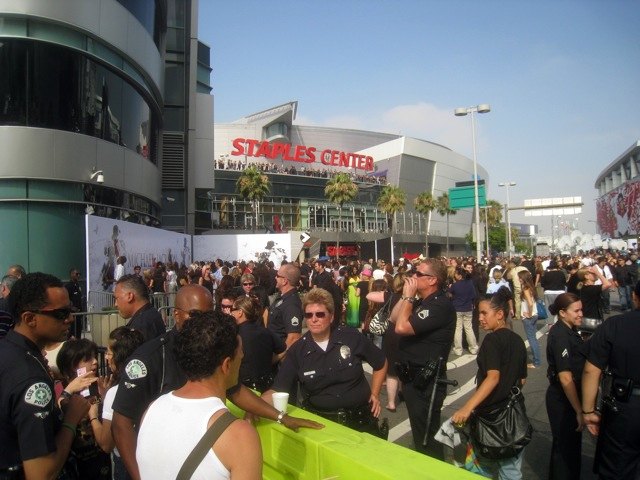 A city report (.pdf) released Friday shows that costs for the Michael Jackson public memorial service were more than originally thought, which was $1.4 million. The actual cost, according to the new report, was $3.4 million. That's $1.2 million for straight time salary costs (mostly police) and $2 million for overtime salary costs and expenses (once again, most for police).

"It feels like a burn: AEG is set to recoup 10 percent of the proceeds from This Is It, the film based on rehearsals at the very AEG-owned Staples Center where the Jackson memorial was held," wrote Dennis Romero at LA Weekly. "That adds up to $20 million so far."

Any good news? Estimates put the economic benefit of the event at around $4 million. That's because hotels, taxi and tour services saw an increase in revenue.

In terms of recouping the costs from AEG, all signs point to not likely. That's because the city's recent ordinance on special events fees and permits was not law when the Jackson event happened. "While Council instructed that the City proceed in this manner a year ago, the ordinance was not presented, adopted, and become effective until after the Michael Jackson Memorial," the report explained.

Continued: "In light of the overall positive economic impact of the event ($4 million), and that there was no ordinance in place prior to the event providing for cost recovery from major venues, the City may wish to cease pursuing cost reimbursement. However, should Council wish to pursue seeking reimbursement for the City's costs, Council should request the City Attorney to provide, in closed session, a briefing on the legal theory under which the City could compel the event organizers to provide that reimbursement."

The report will be discussed at 9:30 a.m. City Council meeting this morning.