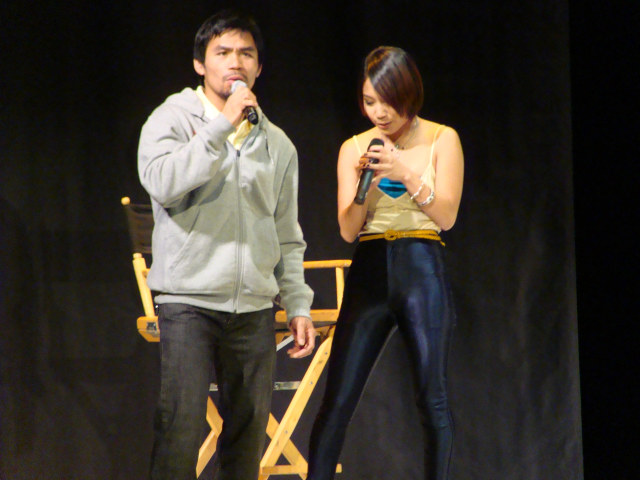 Manny Pacquiao and singer Melissa R. perform at Nike Sportswear Presents Under the Hood with Manny Pacquiao last week at the Montalban Theater in Hollywood | Photo by Tim Hammer (LAist)

Tonight the entire fight world turns its attention to Las Vegas, the site of the highly anticipated fight between Manny Pacquiao and Miguel Cotto. Last week, however, Pacquiao stood center stage in his adopted city of Los Angeles before a packed crowd of supporters at the Montalban Theater.

The event, dubbed Nike Sportswear Presents Under the Hood with Manny Pacquiao, featured a performance from a team of dancers dressed comfortably in Nike hoodies, music from a house band also dressed in Nike hoodies and the man of the hour — Pacquiao sporting a Nike hoodie.

While the event may have had all the makings of a big commercial for the Swoosh disguised as a pep rally, it actually was a very spirited gathering of Pacman fans eager to get a glimpse at their man. As expected, the crowd assembled in Montalban erupted when the best pound for pound fighter in the world entered the stage.

Pacquiao alongside trainer Freddie Roach, assistant trainer Buboy Fernandez and conditioning coach Alex Ariza took questions from the fans both in attendance at the historic Hollywood theater and home watching the event online. Even after watching interviews and countless hours of HBO's 24/7 series, it was somewhat startling to see the fighter's shy yet charismatic demeanor in person as he answered questions from the audience. Watching him nervously talk about his training regiment, or the one time he had the chance to 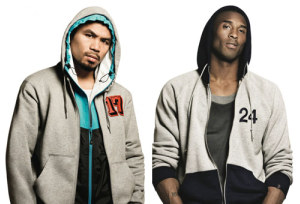 While many fight fans believe that a victory tonight over Cotto will bring us closer to the long-awaited Pacquiao-Floyd Mayweather Jr. fight, Pacman successfully ducked the chance to mention his rival's name. An audience member asked, "If you could fight any fighter, dead or alive, who would it be?" As Pacquiao paused, several members of the crowd screamed "Mayweather!" Not at all phased by the response from his supporters, Pacquiao answered "Miguel Cotto."

Pacquiao's fanbase extends to the Hollywood community, much of that can be attributed to his training at Roach's Wild Card Gym, a popular spot among celebs. Famous fans Emile Hirsch, Mario Lopez and Mark Wahlberg surprised the fighter with video greetings wishing him luck in tonight's fight. Only one of these greetings featured a celebrity shadowboxing. Don't think we need to tell you who; but yes, it was the Bayside High alum.

The undisputed highlight of the event was Pacquiao's impromptu musical performance. Singer Melissa R. took the stage to sing Pacquiao's ring entrance music "Lahing Pinoy". Very quickly this performance turned into a duet, with Pacman grabbing a microphone and flexing his golden pipes (video below).

Pacquiao supporters know that when there's a mic and music handy that there's a good chance their favorite fighter might very well sing a song or two. This also occurred recently during an appearance on "Jimmy Kimmel Live."

Tonight, Manny is considered a 3 to 1 favorite to win and continue his reign as the best pound for pound fighter in the world. Last Saturday he proved why he's a fan favorite, and that hoodie he had on looked pretty good too.