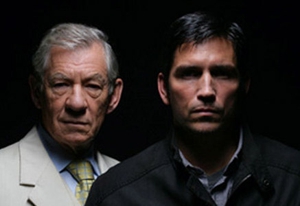 AMC's "The Prisoner" premieres on Sunday at 8pm
Weekend Edition

Programming of note this weekend: "Saturday Night Live" has an odd choice for host this week: January Jones, aka Betty Draper from AMC's "Mad Men". She has a part in the obnoxiously overpromoted comedy Pirate Radio but does that make her funny? We're going to watch to find out if this turns out to be a brilliant gamble. Musical guest is the eager-to-participate-in-any-sponsorship-opportunity aka "whores", the Black Eyed Peas.

Sunday at 8pm features the premiere of AMC's version of Patrick McGoohan's cult classic "The Prisoner" starring James Caviezel and Sir Ian McKellan. The new one maps to 6 of the 17 episodes of the original (watch a couple of the originals on IFC tonight). We'd been hearing about (and hoping for) an update to the series since our acne-infested nerdcore teenager days in the mid-1980s but now that it's happening a couple decades later we feel somewhat conflicted. Patrick McGoohan died in January of this year but made the choice not to participate in this production so it kind of feels like this was made without the blessing of the Master. The show does have a great cast and from what we've seen on the blog at AMC, it looks really great so there's no way we're not going to check out the 2 hour premiere..
—-
While we are big fans of all the late night players someone has to come out on top and lately that's been David Letterman and Craig Ferguson. Even Jimmy Kimmel has been trending up in viewership and all of this is at the expense of NBC where solid evidence is appearing that the Jay Leno strategy isn't working out as planned: the show is losing lead in audience and even less are staying on to watch local evening news.
—-
We're happy to see Jeffrey Tambor cast in a TV pilot, and this time opposite "Doctor Who" David Tennant. Tambor's had some great success on the big screen but his TV efforts like "Welcome to the Captain" and "Twenty Good Years" didn't do so well. He's a tremendous talent and we have high hopes for this pilot (no set air date).
—-
The TV Junkie Plan: Tonight - "Stargate Universe", "The Prisoner" (the old one), "The Soup", Kimmel. Saturday - "The Dish", "SNL" (January Jones, Black Eyed Peas). Sunday - "The Prisoner" (the new one), "Californication". Please review the full weekend of listings!

8:00pm Stargate Universe Syfy - The team visits a jungle planet and recovers a Kino; members of the team begin to fall ill.

9:00pm The Prisoner IFC - 2 episodes: Once Upon A Time and Fallout

9:00pm Sanctuary Syfy - Dr. Helen Magnus fights to save the life of a research scientist who was attacked by a seemingly docile Abnormal.

9:00pm Ugly Betty ABC - Marc encourages Justin to befriend the cheerleaders at school; Bennett and Natalie lure Daniel deeper into the Community of the Phoenix

10:00pm Crash Starz - Ben rebuilds his relationship with ex-wife Suzy Fields (Peggy Lipton) as he continues to seek clues regarding a murder.

10:00pm NUMB3RS CBS - Agent Ian Edgerton (Lou Diamond Phillips) is the prime suspect in a murder when the informant he met with winds up dead

8:00pm The Prisoner AMC - A man awakes in an isolated town called The Village; Two attempts to assimilate Six; Six meets his brother and tries to escape; Two confronts his son about his growing sense of rebellion.

8:00pm Nature PBS/KCET - A humpback whale learns lessons from her mother during her first year of life.

8:00pm The Amazing Race 15 CBS - The teams must decipher a message in an ancient brotherhood lair and play a muddy game of volleyball.

9:00pm Dexter Showtime - Dexter questions his father's code and seeks answers on a road trip with Trinity; Debra discovers she has been blinded to the truth.

10:00pm Californication Showtime - A night of hedonistic abandon ends in an epic showdown.