The TV world is abuzz with Lou Dobbs' abrupt resignation on his broadcast last night after nearly 30 years at CNN. Everyone is asking "why" this was happening but Dobbs' political bent has been more than slightly apparent for the last several years. We wonder on what basis Dobbs could say CNN has stifled his opinion as it would appear that he has had free reign during his tenure. We also wonder if this move isn't related to his house getting hit by a bullet late last month as his wife and a Dobbs employee stood outside. It would be a shame for him to have left over personal safety issues.
—- 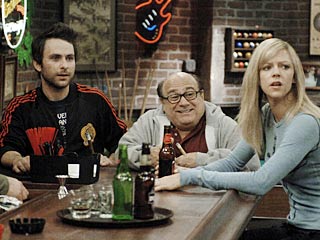 "It's Always Sunny In Philadelphia" on FX at 10pm
We were pleased to learn that not only is Ray Bradbury still alive, but that he will help create a mini-series based on 6 of his stories. As a budding 11 year old nerd, we begged our parents to allow us to watch Ray Bradbury's "Martian Chronicles" back in 1980 so we're hoping for similar awesomeness.
—-
It's a tough call to go with comedy tonight when you've got both "FlashForward" and "Fringe" on but we feel like making up for last night since Taylor Swift and the gawd-awful CMAs pre-empted "Modern Family". Tonight Woody Harrelson will be on Colbert talking about his movie, The Messenger, which we spotlit a couple weeks ago (we'd also like to revel in the fact that we beat The New Yorker in our coverage of it).

8:00pm Survivor: Samoa CBS - Motivated by extreme hunger, one castaway kills a rat to provide for her tribe

8:00pm FlashForward ABC - Mark's romantic getaway with Olivia is cut short when he gets a tip that leads him to the tattooed assassin in his flashforward

8:30pm Parks and Recreation NBC - After a City Hall mural is defaced, the members of the Parks Department compete to come up with a new design

9:00pm Fringe FOX - A kidnapping rapidly escalates into a hostage situation, and authorities closing in discover that an unknown force has mind-blowing consequences

9:30pm 30 Rock NBC - The crew awaits the arrival of the new cast member

10:00pm The Mentalist CBS - Minelli orders Patrick and his team to work together with Bosco and his team in order to locate a kidnapped woman

10:00pm The Real Housewives of Orange County Bravo - Lynne's showing comes to a halt; a fight between Tamra and Gretchen forces the women to choose sides

10:30pm The League FX - Ruxin invites everyone over for Sunday afternoon football, see the baby and lunch.