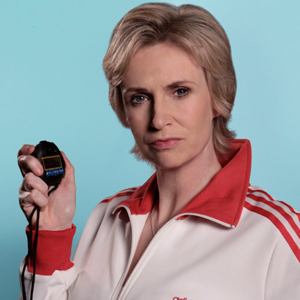 It's time for "Glee", the music industry savior, at 9pm on FOX
Did any of you tune in to the 2nd episode of "V" last night? We ask because viewership dropped by about 30% from the previous week. Don't get us wrong, we like the series but the drop in ratings made us think a bit more about the program. First of all, they're not really breaking any new ground here and that's fine since the majority of the targeted demographic don't remember the original series at all but we thought there would be more updating to the story other than contemporary babes, hunks, and computer graphics. We'll stay tuned for more but after this we wonder about the remake of the classic and dear-to-our-hearts "The Prisoner", which premieres this Sunday on AMC.
—-
George Lopez's "Lopez Tonight" premiered on Monday at 11pm on TBS entering a very crowded field of late night entertainment. Interestingly, the premiere garnered about a million more viewers than "The Wanda Sykes Show" did on Saturday night with a fraction of the promotion and has remained consistently high. We discussed "The Wanda Sykes Show" on The TV Junkie a couple days ago and while we'll make the effort to watch it on upcoming weekends, feedback from readers doesn't paint the show in a very nice light. Lopez is starting out with a Leno-styled strategy of pulling in as many A-list (or at least high B-list) celebs as he can for at least his first week. Tonight he has Queen Latifah, Oscar De La Hoya, comic Lisa Lampanelli
—-
We forecast the demise of FOX's "Dollhouse" earlier this year as well as a couple weeks ago but now it's official. We know we'll see actors from then ensemble as well as Joss Whedon elsewhere but we'll tune in to watch the remaining episodes.

8:00pm The New Adventures of Old Christine CBS - Max tries to teach Christine to follow through rather than quit when things get too hard.

8:00pm Mercy NBC - Veronica Veronica and Mike, estranged since her affair became public, are reunited by a Flanagan family crisis

9:00pm Living With Ed Planet Green - A family camping trip. With Rachelle in charge as the camp director and supplies that include everything but the solar panels, the Begleys hit the trail.

9:00pm Glee FOX - Will encourages the members of glee club to perform in wheelchairs in support of Artie; Kurt and Rachel compete for a big solo.

10:00pm The Jay Leno Show NBC - Florence Henderson makes a special appearance that will easily be the funniest part of this show.

10:00pm South Park Comedy Central - Cartman will not be silenced!! 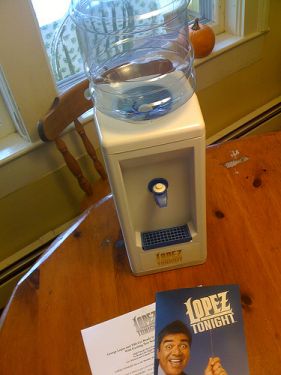 Ridiculous swag we got for "Lopez Tonight" - really, what were we supposed to do with this?