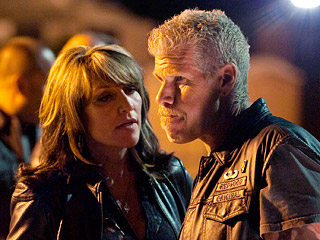 "Sons of Anarchy" will have a 1.5 hour special episode tonight starting at 10pm on FX
Yesterday we waxed poetic about the "Mad Men" season finale which had a viewership of about 2.3 million but let's keep in mind that in this America, 1 million more people watched the Khloe Kardashian/Lamar Odom wedding special on E! Just when we thought we were becoming a little more sophisticated....
—-
While we can understand that ABC won't be renewing "Eastwick" (a TV version of an '80s movie?), we don't get why they've ordered more of Christian Slater's "the forgotten". Beyond the premiere, we haven't mentioned this show that often which just seemed like yet another police procedural/movie star vehicle. If you are a fan, tell us why you like the show.
—-
Tonight brings the return of "V" and we'll be on it this time since the episodes don't appear on Hulu until Saturday. "Sons of Anarchy" will have be a 1.5 hour special and series guest star Adam Arkin will be on "The Late Late Show With Craig Ferguson". At the end of our post check out the in-production "Pacific" promo from HBO featuring the commentary of Tom Hanks and Steven Spielberg.

The TV Junkie Plan: "V", "Dirty Jobs", "Sons of Anarchy", "The Colbert Report", Letterman (2nd half), Ferguson. Be sure to click through and see the full highlights listing.

8:00pm V ABC - Erica and Father Jack discover they are being tracked by a Seeker from the V's

9:00pm Dirty Jobs Discovery - Mike does some research on beetles and then tries his hand at making glass art.

9:00pm NCIS: Los Angeles CBS - The NCIS team uncovers evidence that determines who shot Callen six months ago and why

9:30pm Becket TCM - (1964) King Henry II (Peter O'Toole) argues over church and state with Thomas a Becket (Richard Burton) in the 12th century after naming him archbishop of Canterbury

10:00pm Sons of Anarchy FX - ATF Agent Stahl gets up close and personal with the MC; tension between Jax and Clay forces Gemma to make a tough decision

10:00pm James May on the Moon BBC America - James May traces the stories of his astronaut heroes and puts on a space suit to enjoy the view of Earth from a U-2 spy plane.