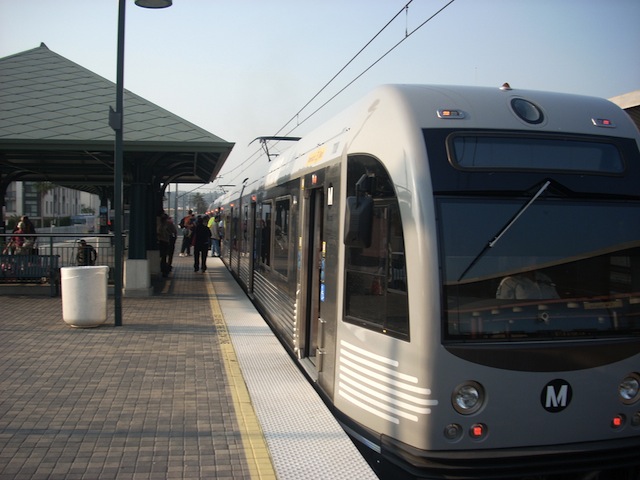 Photo by LA Wad via LAist Featured Photos on Flickr

When the Eastside Extension of Metro's Gold Line opens this Sunday, it will be a lot more than just free rides. Four events are planned at or near stations along the line, featuring food and music.

Most notably, the Mariachi Plaza Station will be where riders can visit the First Annual Boyle Heights Block Party and Mariachi Festival. At the Little Tokyo/Arts District Station, Metro says there will be a live karaoke stage and "delicious cuisine from dozens of nearby restaurants." At the East L.A. Civic Center Station, a farmers market and live Chicano rock music can be found.

Full details of the day's events are below.

Free rides from one end of the Gold Line to the other, the 19th Annual Mariachi Festival featuring some of the best bands in Southern California, a special visit from Santa and other events will mark the celebration of the Edward R. Roybal Metro Gold Line Eastside Extension when it opens to the public Sunday, Nov. 15.

Community leaders and organizations have responded to the opening of the Metro Gold Line Eastside Extension with dozens of events along the alignment, especially at four locations: East LA Civic Center Station, Mariachi Plaza, Little Tokyo/Arts District and Union Station. Sunday festivities will take place from 9 a.m. to 5 p.m.

Where: Third Street and Civic Center Way (near the East L.A. Public Library)

Where: First Street and Boyle Avenue

What: The First Annual Boyle Heights Block Party and Mariachi Festival on First Street, between Boyle Avenue and State Street. Two stages of live Mariachi, Latin and contemporary music -- including Jahnny Wallz, Domingo Siete, UmoVerde, Dirty Hens and Quito Sol. The bands will play a mix of music inspired by the Americas, the Caribbean and Africa. Mariachi performances will include local and internationally recognized musicians: Mariachi Sol del Mexico, Mariachi Reyna de Los Angeles, Mariachi Mexicapan, Mariachi Voz de America, Mariachi Santa Cecelia and Mariachi Conservatory. They will play a mix of mariachi music inspired by the different regions and styles of Mexico. There will also be free giveaways, a free kids corner, art exhibits and lots of food.

Where: Alameda and First streets

What: Live karaoke on stage, delicious cuisine from dozens of nearby restaurants, special family activities and booths representing businesses and organizations from the area.

What: A special pre-holiday visit from Santa, who will appear with the Caroling Company, 1 to 1:30 p.m., in anticipation of his first holiday appearance in the 2009 Hollywood Santa Parade on Sunday, Nov. 29.Also at Union Station will be a display from Madame Tussauds Hollywood, as well as bands, guitarists and food booths .