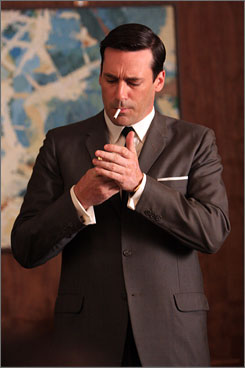 Smoke 'em if you got 'em Don, "Mad Men" season finale kicked butt
As we know, last night had the excellent season finale of "Bored to Death" which we gave you a sneak peek of but it also had the finale of the multi-Emmy winning "Mad Men" on AMC. "Mad Men" generally had a great season with only a couple sleepy episodes but the finale was incredible. Maybe Don is finally free of Betty but the plight of the kids had our female viewing party members crying with most feeling that Don was much better off without "that crazy Betty". What will keep us pining for the next season is the momentum that was built up with what was ostensibly the launch of a start-up '60s-style. Summer of 2010 can't come too soon.
—-
While we think Taylor Swift did an admirable job on "SNL" we didn't think she "knocked it out of the park" among other things we saw on Twitter. Unfortunately for "SNL", their spot-on take of FOXNews came a couple days after "The Daily Show" one-upped them with Jon Stewart channelling Glenn Beck to a tee. Also, there's no way the very pretty Kristen Wiig could ever be mistaken for battle-axe Greta van Susteren. Up next for "SNL" is guest host January Jones, aka "Betty Draper" from AMC's "Mad Men" which is a puzzling decision as we're not sure about her chops for sketch comedy. We hope she surprises us this coming Saturday (with Black Eyed Peas as musical guest) as we will be watching. We found some pics of the poor girl getting harassed by paparazzi on her way to the airport for her flight to NYC to rehearse for "SNL". Holy crap she looks irritated but that's the price of fame we suppose.
—-
New York City declared today to be "Sesame Street Day" on the eve of the 40th season premiere. Not to be outdone, the Academy of Television Arts & Sciences Foundation announced that it has begun accepting applications for the Fred Rogers Memorial Scholarship. Ernst & Young LLP will underwrite three $10,000 scholarships for Undergraduate and Graduate Students - you can find the application at www.EmmysFoundation.org and the deadline is January 15th.
—-
Showtime fans aching for the return of their Winter series should know that the Monday lineup returns on Jan. 25 with the second season of "Secret Diary of a Call Girl" at 10pm, followed by "Tracey Ullman's State of the Union" at 10:30pm. Mondays will have a new 11pm series with the launch of "La La Land" in the 11pm slot. "Nurse Jackie" returns on March 22nd.
—-
Did anyone watch "The Wanda Sykes Show"? Tell us about it.

8:00pm How I Met Your Mother CBS - When Robin and Barney hit a rough patch in their relationship, Lily tries to break them up.

8:00pm House FOX - A teenage girl is brought to the hospital with severely swollen appendages after a wild night out

9:00pm Heroes NBC - Claire is determined to get to the bottom of the attacks; H.R.G. realizes he may be the source of Claire's troubles

9:30pm The Big Bang Theory CBS - Sheldon tries to make peace when Leonard and Penny get into an argument.

10:00pm Cake Boss TLC - Buddy and his team create a massive cake for the U.S. Air Force; the guys get their groove on while making a dance-themed cake