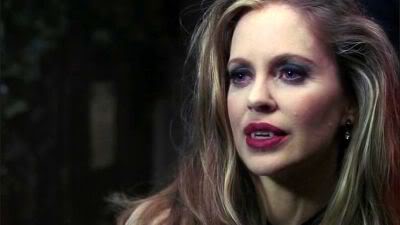 Kristin Bauer plays Pam, one of our favorite vampires from HBO's "True Blood"
Tomorrow at LUSH Cosmetics in Santa Monica, Kristin Bauer, aka Pam from "True Blood" will be signing autographs and taking pics between 1 and 3pm with fans who simply show up to support the International Fund for Animal Welfare’s (IFAW) Tails for Whales photo campaign.

We had a chance to talk to the "True Blood" star about her support for this specific cause as well as get the lowdown on what will be on the upcoming "True Blood" DVD and the inspiration behind her character on the show.

LAist: Tell us about "Tails for Whales".

Kristin Bauer: We've been hearing about "save the whales" ever since we were kids and now we hear a lot about polar bears so I had believed that this had been taken care of this but we can't really cross anything off the to-do list in terms of saving. What troubled me was that there are so many unnecessary deaths for whales, whether it's the whales getting hit by ships in their breeding grounds or when they drown in old driftnets and fishing equipment in the ocean. This campaign is a way to let the people in Washington that we elect that we do want whales saved and that there is a bill that's been introduced that can do this. Right now many people are struggling financially and what is great about this campaign is that it's easy, it's fun, and we're not asking for money. We're just asking for photos of people making the whale tail with their hands. The only other option is to sign another petition but this campaign puts faces and photos towards the cause which I think is a lot more compelling. I'm showing up at LUSH because they have been so generous by creating a lotion from which the proceeds go to IFAW. Hopefully people will show up at LUSH and I will trade them an autographed photo for a photo of them making a whale tail and since they are there they might also be interested in this charity product.

LAist: What struck you about this campaign compared to other charities?

Kristin Bauer: I think about 80% of the population cares and wants to do something but how do you help polar bears? This campaign which just involved taking a picture is something anyone can do and anyone can show up to this store as well. A lot of these other causes are for animals that are on the other side of the world but these are animals that live right around here, think about what a huge port Long Beach is and all that shipping traffic. We want to buy stuff at Cosco and that's how the stuff gets here and we need to take responsibility for that.

LAist: Congrats on yet another great season of "True Blood".

Kristin Bauer: I can't wait to get back to that, I've been playing humans this whole off-season and it's not nearly as much fun.

LAist: I wanted to ask you about the classic stylings of your character "Pam". Her classic stylings remind me of Catherine Deneuve, she is very elegant, in control, what's your inspiration when working on her?

Kristin Bauer: You don't really know, you're learning on your feet and you learn as you go. I had the concept that she was probably wealthy and that she was made a long time ago and she's seen a lot of humanity come and go. She's seen it all. I just did the commentary on the Blu-ray DVD as Pam, 35 pages of dialogue of her. She comments on all the aspects of the show, Eric, Sookie, etc. More dialogue than I've had in two seasons of the show. But even right now I don't know if she and Eric were lovers or her real back history.

LAist: It's an interesting comparison, Pam is very restrained and cool whereas Eric can succumb to impetuous behavior even though he is older than her and the Sheriff of the area. Perhaps I'm just projecting my own desires but it seems like there could be this layer of kinkiness in Pam just underneath the surface that could just bust out.

Kristin Bauer: I know, I think so too. First it seems like she is incredibly bored and hard to impress and that she's thoroughly embraced being a vampire, she is a superior life form. But when I think about that, she is very open, and that's where the kinkiness comes in. I think she's pan-sexual and she can look at Eric, and Sookie and she's not discriminating, with an openness that she looks at this world and the human race from the viewpoint of an immortal. As Kristin Bauer, I think we can stop this Titanic and turn it around and stop the environmental destruction and minimize the damage of hitting that iceberg but I think Pam is like "Let's hit it, I'll be fine and I'm kind of bored."
---

Kristin Bauer will be at LUSH in Santa Monica from 1-3pm tomorrow (Saturday 11/7/2009). The first 100 people who RSVP to tailsforwhales@lush.com will receive a free ocean inspired Big Blue Bath Bomb, courtesy of LUSH. Additionally, a bag of Whale Tail chips will be given to all shoppers who submit their photo for the campaign during this time.

To hear the complete interview with Kristin Bauer use this player: 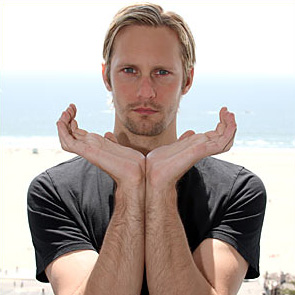