Art Comes to Life Tomorrow at the Monster Drawing Rally 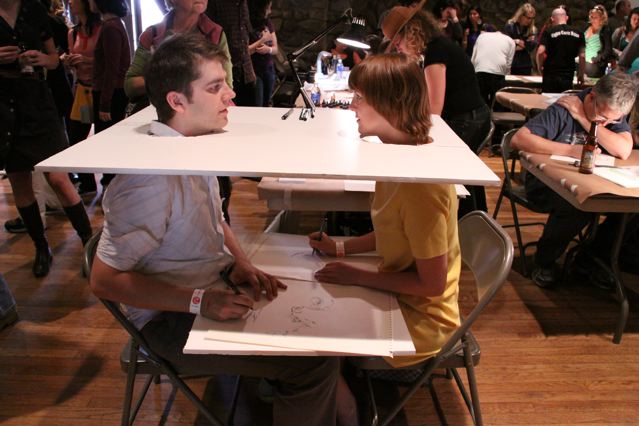 With the exception of sidewalk caricature sketch masters, very rarely an artist's creativity is put on the spot in front of curious eyes. Nine years ago in San Francisco, the Monster Drawing Rally did exactly that as a way to bridge the art community with their supporters while raising money for a cultural cause.

When the idea was first unveiled in L.A. by the non-profit Outpost for Contemporary Art (it was originally conceived by SF-based Southern Exposure) in 2004, organization director Julie Deamer wasn't sure how the SoCal crowd would respond. A Ventura native who lived in San Fran for 12 years before returning to the City of Angels, she quickly became disillusioned with the over-competitive, career-driven side of L.A.'s gallery scene. "Here I am thinking art could change the world," Deamer said in an interview. "In San Francisco, you don't have the strong market forces...People are making art just because they want to." For her and the rest of the Outpost members, the event was all about "filling a gap in Los Angeles."

Now five years after its L.A. debut, the annual Monster Drawing Rally is once again putting artists' easels out in the open at the Center for the Arts in Eagle Rock tomorrow. For a $10 donation ($5 for students, FREE for seniors, young-uns 12 & under and Outpost members), watch as about over 100 artists draw their little heart out for an hour each from 2 to 7 p.m.; they'll work in four groups of about 25 every hour. The results will be sold for $75, with proceeds benefiting the organization. There's something for everyone: For foodies, local "slow fast food" eatery Oinkster is bringing the bacon and the Kids' Drawing Corner will keep the little ones happy while you get your drink on courtesy of Cafe de Leche and the New Belgium Brewing Company (mmmm, Fat Tire!). If you're really too impatient to watch as your future wall art unfolds in the making, move to the music of DJ Dave Muller, indie pop folksters Artichoke and offbeat rapper Dude Dogg.

It's about "using art to bring people together, to have more of a direct sort of experience with artists and their production and their process," said Deamer. "It's really fun for audiences to watch art come alive...(and) the artists enjoy being acknowledged for their creativity." In addition to hosting lecture series and other art programs, Outpost's upcoming projects also include bringing six South American artists to L.A. and bridging the international and local art communities. The rally "really is a way for us to enlist and get to know hundreds of local artists that we introduce to our international visitors."

The Center for the Arts is located at 2225 Colorado Blvd., Eagle Rock, 90041. For the full line-up of artists, check out Outpost's website.