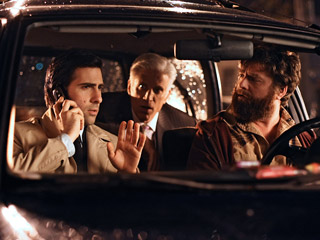 The "Bored to Death" season finale is Sunday at 9:30pm on HBO
Weekend Edition

HBO is booking a series involving the gender transition of a female to a male. Yes, a 1/2-hour drama focused on transexuality is being developed but no casting or production schedule has been mentioned.
—-
The Cartoon Network is going to have...a couple live-action series. "Tower Prep" and "Unnatural History" will begin their 13-episode runs in January, 2010.
—-
There's some great TV this weekend: tonight the talk shows will feature Christopher Walken, The Pixies, and Regina Spektor. While we don't have high hopes for the Taylor Swift edition of "SNL" we will watch anyway but Sunday features the season finales of both "Bored to Death" and "Mad Men". Please check out our video post yesterday of interviews with "Bored to Death" players Ted Danson, Jason Schwartzman, and series creator Jonathan Ames and check out the video clip at the end of the post for a sneak peek at the finale.

9:00pm Monk USA - To woo the only holdout on the reinstatement committee, Monk accompanies Lt. Disher on a scouting trip.

9:00pm Ugly Betty ABC - Matt asks someone to be his "plus one" at Wilhelmina's fundraiser

10:00pm NUMB3RS CBS - The team tries to locate a cybercrime lord with an undercover sting

10:00pm Crash Starz - Ben (Dennis Hopper) is tasked with a life or death decision when a cancer-stricken friend (played by Keith Carradine) asks for his assistance in committing suicide to end his pain and suffering. This friend is actually the husband of his ex-wife (played by Peggy Lipton of "Mod Squad" and "Twin Peaks" fame).

9:00pm Robin Hood BBC America - Robin tries to strike a deal with Isabella, but is rejected

8:00pm Nature PBS/KCET - A team of herpetologists in southern Africa study the black mamba, one of Africa's most dangerous and feared snakes.

8:00pm The Amazing Race 15 CBS - One team encounters a speed bump while racing through Stockholm

9:00pm Curb Your Enthusiasm HBO - Larry is forced to embrace his feminine side; Cheryl competes for a "Seinfeld" role

9:00pm Dexter Showtime - Dexter strikes a balance between family, work and his secret life; Debra expresses a renewed interest in her father's past.

9:00pm Masterpiece Contemporary: Place of Execution PBS/KCET - A journalist makes a film about a 13-year-old girl who disappeared 40 years earlier.

10:00pm The Girls Next Door E! - Karissa and Kristina train to portray sexy twin vixens in a Sofia Coppola movie. Yeah, that's a stretch for them.