The season finale of HBO's "Bored to Death" is this Sunday at 9:30pm and it is a must-watch. There are plenty of McShows out there but this is not one of them and nor will it ever be. The brainchild of author and memoirist Jonathan Ames, the show about an author and part-time amateur private investigator bursts with uncompromised originality in every episode. Jason Schwartzman plays an "emotionally autobiographical" version of Jonathan Ames, navigating through life, love, and mysteries in a Brooklyn that makes you want to pack your bags and visit at the first opportunity. Ted Danson plays magazine publisher George Christopher, a baby-boomer success story who wants to stay relevant, connected, and alive, and attempts to do so via his blossoming friendship with Jonathan.

We had a chance to talk to these three remarkable people, the Television Icon and the two Renaissance Men, at the Paley Center for Media's event in New York City, "Raymond Chandler Meets Craigslist: HBO’s Bored to Death", on Monday, November 2nd. We are huge fans of the Paley Center and urge you to check the programs at both their NYC and Los Angeles locations. This event, for example, involved a pre-broadcast screening of the season finale followed by a discussion and open-to-the-audience Q&A with Ted Danson, Jason Schwartzman, and Jonathan Ames, moderated by "Bored to Death" guest star (and frequent collaborator of Jonathan Ames) John Hodgman. This was for an intimate (but sold out) audience of about 200 people and was simply incredible as all events at the Paley Center have been in our experience.

After the screening of the season finale, which will air this Sunday at 9:30pm on HBO, John Hodgman introduced the panel whose camaraderie was humorous, genuine, and touching. Hodgman adeptly steered the conversation with pointed humor with such offerings as "But Jason looks nothing like Jonathan Ames, who appears to be the ghost of a long dead ship's captain" and "Ted Danson, you're tall and stunningly handsome and an incredible actor..... I don't really have a question here, I'm just saying this to you".

Indeed, Ted Danson's involvement in this series is worth remarking on. Ted Danson doesn't "need" to do anything - he only gets involved with what interests him or what will challenge him, whether it is the improvised chaos of friend Larry David's "Curb Your Enthusiasm", or his compelling and Emmy-nominated performances in two seasons of FX's "Damages". What came through in our interview was his respect and admiration for the work of Jason Schwartzman and his desire to be involved with the "wonderfully odd" creation of Jonathan Ames. His opinion is that the character of George Christopher, is easily "one of the best I've ever had" and if you look at the long and storied career of Ted Danson, that's an impressive statement.

A theme in the series, Jonathan Ames told us, is how to relate heroism in every day life and while Ames is a larger than life character (author, performer, lyricist, occasional pugilist, etc.) he connected with the Paley Center audience about topics like real subway stations and street corners in Brooklyn and feelings of persecution in grade school. In our interview, Ames spoke more specifically about adjustments he would like to make in his writing of the series as well as his enjoyment of Los Angeles (home of his inspiration, Raymond Chandler) and alludes to perhaps some future episodes taking place in LA.

In the panel discussion, Jason Schwartzman related how he first met Ames whom he has long revered saying that he couldn't believe that he would have an opportunity to work with him and did everything he could to support the project. In preparing to perfect the character Jonathan Ames, Schwartzman had the real Ames read the script of the entire pilot into his Mac using GarageBand and then listened to the MP3 incessantly in order to pick up the nuances of Ames' delivery. In answering a an audience member's question about how he became an actor, Schwartzman related what can only be described as a beautiful story - many people in the audience were moved to tears as he related how he was asked, as an introverted, music-focused teenager who had never had even a remote interest in acting, to read for the part that became Max Fischer in Rushmore.

Hodgman closed the evening out with the pronouncement that Danson, Schwartzman, and co-star Zach Galifianakis are so far the pre-eminent comedy trio of the 21st century. The accuracy of the statement was not disputed by an audience that gave the panel a standing ovation.

The season finale of "Bored to Death" airs Sunday at 9:30pm on HBO. For more information, check out the show's website. As always, see what is going on at the Paley Center - definitely check out their NYC location when visiting that city, their building is right across the street from MoMA. 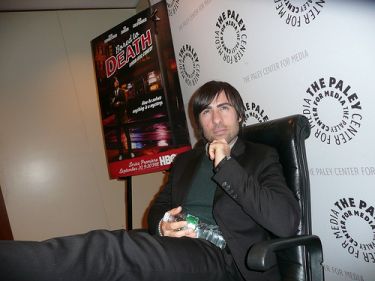 Jason Schwartzman stars in "Bored to Death" - season finale is this Sunday at 9:30pm on HBO. Photo by Thomas Attila Lewis 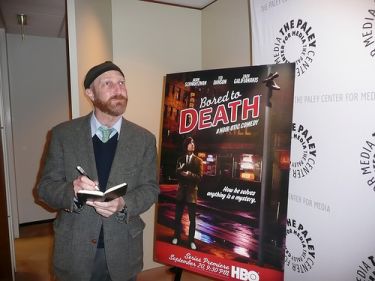 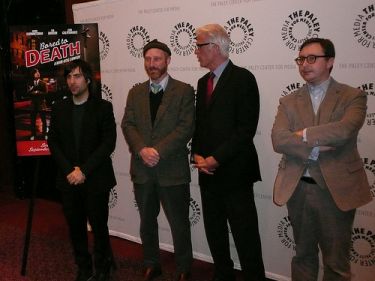 from HBO's "Bored to Death", Jason Schwartzman, Jonathan Ames, Ted Danson, and John Hodgman at the Paley Center in NYC