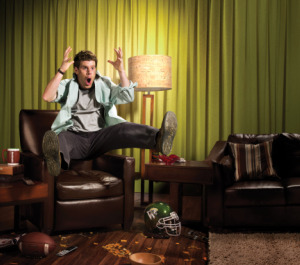 FX's overlooked "The League" is on at 10:30pm
Please check out today's earlier post on HBO's "Bored to Death" featuring interviews with television icon Ted Danson, show creator and celebrated author Jonathan Ames, and indie film darling/all-round talented phenom Jason Schwartzman,
—-
Today's big scuttlebutt is that Oprah may relocate her show from Chicago to Los Angeles by 2011. While this might be more convenient for Oprah and TV executives, we think TV is more competitive and more interesting when it is produced in more locations. If the entertainment industry doesn't want to be labelled as a "bi-coastal elitist" then it should be aware of how this appears.
—-
The ever-appalled Parents Television Council is asking affiliates of The CW to not air the November 9th episode of "Gossip Girl" as its promos have featured a steamy threesome involving at least one of the teenaged characters. Hey PTC, why not communicate that parents should be aware of what their kids are watching? That's what we do.
—-
CBS is cutting back on the number of episodes for "NUMB3RS" from 22 to 16. Ratings for the show are slumping and it could be headed for elimination.
—-
The TV Junkie Plan: "Community", "Parks and Recreation", "The Office", "30 Rock", "It's Always Sunny In Philadelphia", "The League", Conan, Fallon.

8:00pm Community NBC - Study group members try to help Jeff when they learn he is living out of his car

8:00pm The Vampire Diaries The CW - Stefan is visited by one of his oldest friends; Elena tries to avoid Stefan

8:00pm SoCal Connected PBS/KCET - Why are some Los Angeles-area homeowners are suddenly being forced to pay for expensive, mandatory flood insurance?

9:00pm The Office NBC - Having run out of excuses, Jim and Pam are forced to go on an uncomfortable double date with Michael and Helena

10:00pm It's Always Sunny in Philadelphia FX - When a merchandising convention comes to town, the gang tries to develop marketable products in an attempt to build the Paddy's brand.